In the month of October 2022, six exploits and/or hacks occurred across DeFi, resulting in over $700 million stolen. Two of these exploits were done via a price oracle attack, which involves oracle manipulation to extract funds from a protocol. The Mango Markets exploit drew a lot of attention as the attacker, Avraham Eisenberg, made no effort to obscure his identity and instead justified the exploit as a “profitable trading strategy”. These exploits have shown that protocols depending on price oracles are at risk of similar exploits, especially if liquidity is thin and attackers have sufficient capital to perform the exploit.

Timeswap launched its V1 protocol in March 2022 as a decentralized money market protocol on Polygon. Since then, the protocol has originated over $1.1 million in loans and has seen over 6,000 unique users. The protocol allows borrowers to take out overcollateralized loans from liquidity provided by lenders and liquidity providers.

Timeswap was founded by Ricsson Ngo, Harshita Singh, and Ameeth Devadas. Ngo has a masters degree in applied financial mathematics, and is the brains behind the protocol while Singh and Devadas both have management experience in various industries. The rest of the core team are based in India, covering multiple disciplines such as design, development, and legal.

In October 2021, Timeswap successfully raised a seed round (amount undisclosed) led by Multicoin Capital, with participation from Mechanism Capital and Defiance Capital. The protocol is also advised by Sandeep Nailwal and Jaynti Kanami, Co-founders of Polygon.

Timeswap introduces a novel 3 variable constant product automated market maker (AMM) system that allows users to lend and borrow assets without the need for oracles or liquidators (more on this later). Unlike most DeFi lending protocols which revolve around two key participants, i.e. lenders and borrowers, the Timeswap protocol has three key participants: 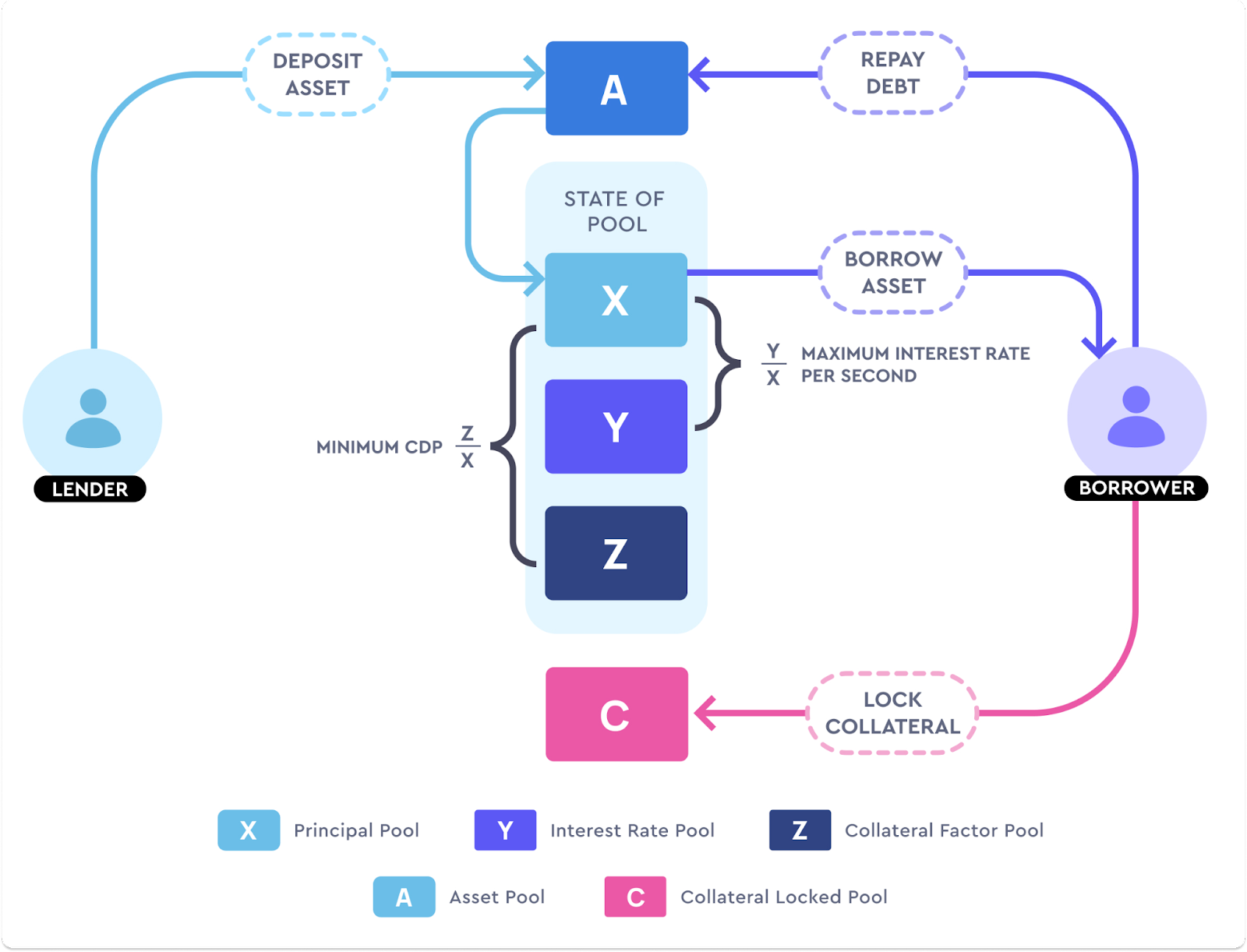 There are two additional pools:

Here’s how it would play out:

Simply put, the constant product, k, remains constant whilst the three variables can increase or decrease depending on which variables are adjusted. For example, when a user lends (adds) assets to the Principal Pool (X), the interest rate (Y) and amount of collateral a borrower needs to lock (Z) reduces.

Lenders provide assets to liquidity pools for a fixed maturity in exchange for interest as well as tokens that represent their share of the pool and amount of insurance should the borrower default. Note that depending on the amount of default occurring in a particular pool, insurance may not be sufficient to make lenders whole. Thus, lenders should choose how much risk they want to undertake before supplying assets to the pool.

On August 31, 2022, Timeswap announced its V2 protocol, which will bring about some changes to its borrowing and lending architecture, based on observations from the performance of their V1 protocol:

In terms of performance, Timeswap has originated over $1.1 million in loans and has seen over 6,000 unique users on its protocol since its launch in March 2022. As of the time of writing, Timeswap has around $160k in TVL, putting them in 13th place amongst other lending protocols on Polygon, significantly behind industry leaders such as Aave ($310 million), 0vix ($4.6 million), and dForce ($3.5 million).

Unlike its competitors, however, Timeswap does not rely on price oracles due to its unique AMM architecture and fixed maturity loans. Although this reduces the risk of oracle exploits and results in higher yields for lenders on its protocol, lenders also take on a significantly higher risk of borrowers defaulting on their loans. The lack of token incentives also puts Timeswap at a disadvantage, which is made evident by their comparatively low TVL and loan originations. Although this may change in the future with the introduction of a protocol token, the team has yet to reveal news with regards to a launch of a token any time soon.

While the impending launch of its V2 protocol does introduce some interesting changes to the protocol’s design, only time will tell if these changes can positively affect its performance. Thus, we look forward to seeing these changes and developments taking place.

This Week in Crypto: Bitcoin 2..