This Week in Crypto: Bitcoin Metrics Signal a Trend Reversal... The Aave DAO’s new stablecoin proposal has been approved by 99.9% of voters, who have pledged a total of half a million AAVE to approve the measure to create GHO, a stablecoin backed by collateral consisting of various cryptocurrencies. Find out more here.

CryptoPunk, one of the OGs in the NFT space, has seen renewed interest in its collection after the iconic jewelry brand Tiffany & Co. released an exclusive offer for CryptoPunk holders. Find out more here.

Around 8,000 wallets appear to be drained in an ongoing exploit of the Solana network. Find out more here.

An investigation into the attack on the Solana network reveals that the affected addresses were once “created, imported, or used in Slope mobile application”.Find out more here.

On Thursday, Meta announced that the company is embarking on the international expansion of NFT support on Instagram.Find out more here.

This week, we take a look at Kujira, a Cosmos Layer 1 blockchain.

Kujira found its beginnings on Terra Classic as ORCA, a liquidation platform on Anchor Protocol. Following Terra Classic’s fallout, it migrated to Cosmos as its own sovereign Layer 1 blockchain. Kujira differentiates itself by leveling the playing field in DeFi, with protocols within the ecosystem aiming to be friendly to average users.

Read more here as we dive into Kujira’s ecosystem, its tokenomics, and recent developments.

This week, we bring you up to speed with Synthetix, a decentralized synthetic asset issuance protocol on Ethereum Layer 1 and Layer 2 (Optimism).

Synthetix has been in the limelight with its spiraling trading volume in the bear market. Atomic Swaps, a new exchange function, were regarded as the main driving force behind the growth.

Read more details here as we delve deep into its recent developments and future outlook.

The broader crypto market wavered slightly after the Federal Reserve officials reiterated the bureau’s hawkish stance on curbing inflation. However, the market shortly recovers its ground on the back of more bullish news on the adoption and investment front. BTC snaps its seven-day decline and finds a stronger foothold above the $23k threshold. Meanwhile, ETH continues to test the upper bound of its narrow trading range, despite the buzz around the Merge gradually losing steam.

On-chain metrics are signaling a trend reversal amid muted selling pressure. The adjusted Spent Output Profit Ratio (SOPR), a datapoint that captures the average profit realized by spent coins, is approaching the benchmark at 1.0 for the second time since early June. A clear break above the 1.0 mark indicates that the market structure is dominated by realized profits, which are absorbed by growing demand. Usually, it takes a few tries to break away from the bearish inertia and reach an escape velocity. But it’s nice to know that the market is heading in the right direction. 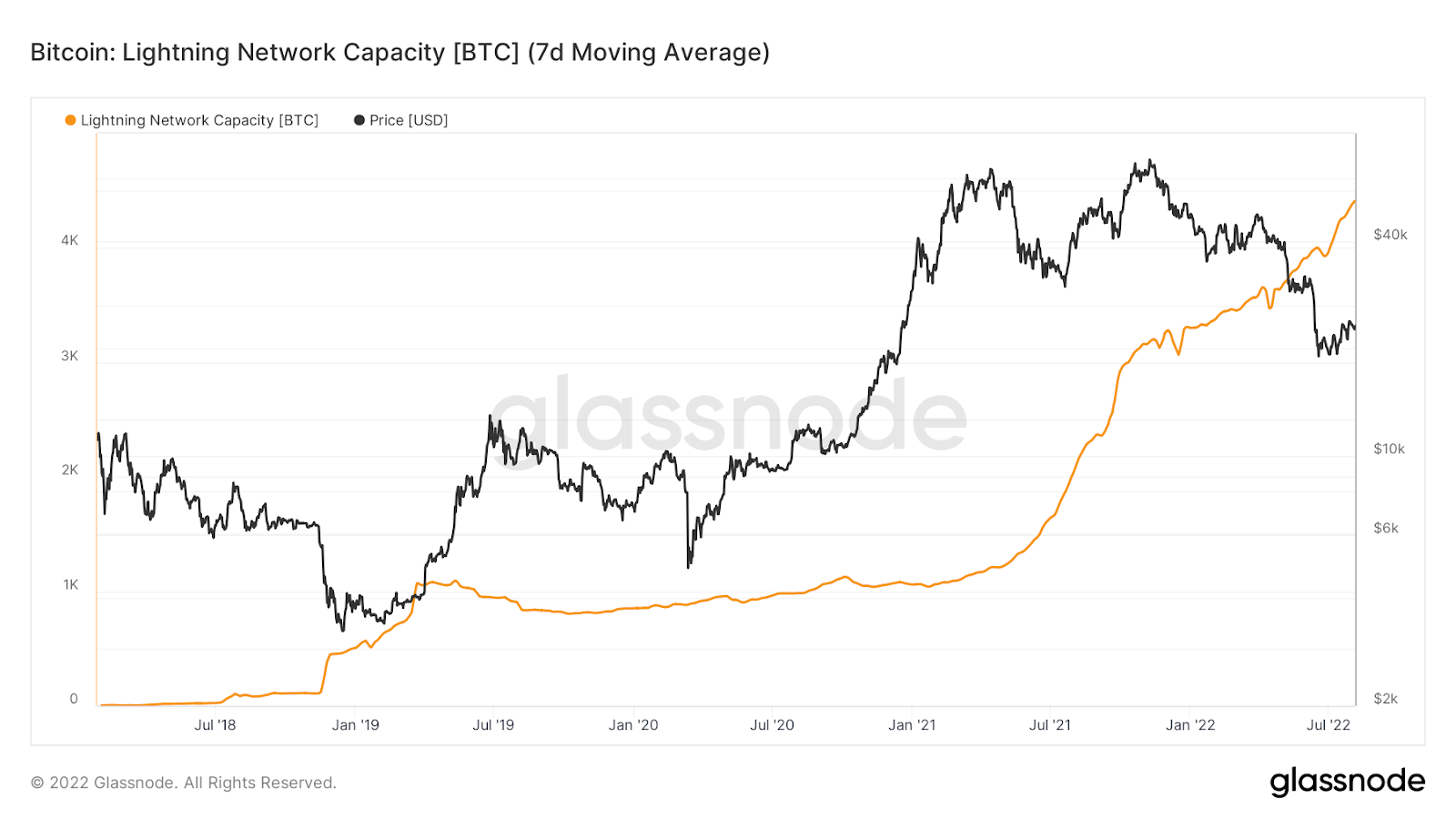 On a more positive note, Bitcoin’s Lightning Network is expanding its capacity organically and continues to reach new heights. The total capacity saw an impressive 19% increase over the last two months against the unfavorable macro backdrop. The organic growth in the absence of any incentive program shows that much liquidity has been routed through nodes in the public channels, suggesting that the network is experiencing healthy expansion. 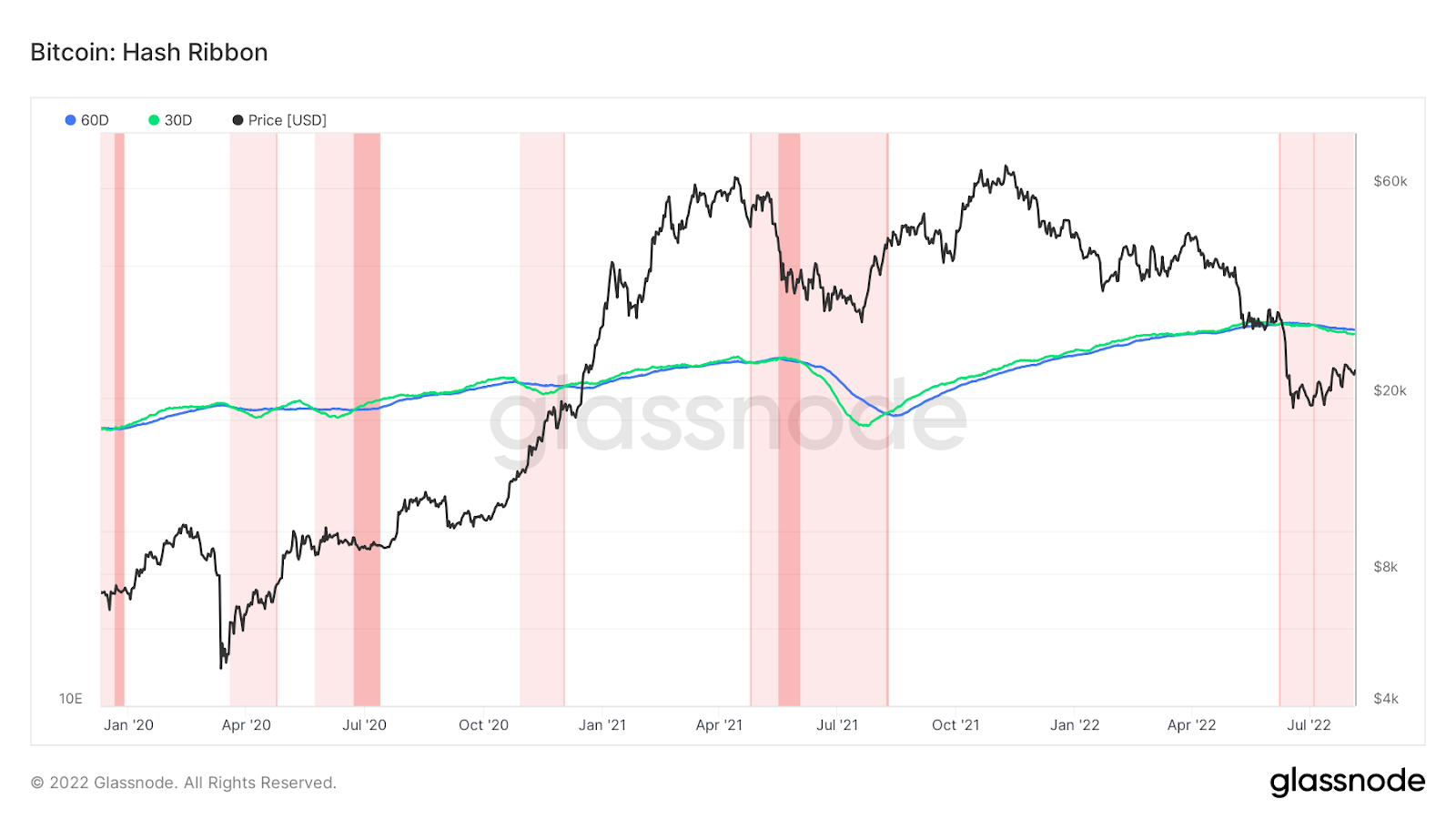 Shortly after the largest mining difficulty reduction since 2021, BTC’s hash rate has seen a significant uptick on the back of improved mining profitability. The rising hash rate in turn lifts the block production rate to 6.13 blocks per hour, a value that is slightly above the targeted rate.