In a brief moment on Sunday, the CryptoPunks NFT collection has flipped the celebrity-coveted Bored Apes in terms of floor prices, topping the leaderboard for the first time since March this year. Find out more here.

Pudgy Penguins’ efforts in releasing its own marketplace and expanding its brand presence seem to have paid off. Find out more here.

SudoRare, an NFT platform forked from SudoSwap and LooksRare that boosts staking opportunities, is the latest project that has rug-pulled its customers. Find out more here.

The Merge is coming, perhaps sooner than expected. The Ethereum Foundation has finalized the date for the shift towards a PoS consensus, according to a blog post on Wednesday.Find out more here.

This week, we take a look at Sei, a Layer 1 blockchain on Cosmos with orderbook-focused infrastructure at its core.

In recent times, we’ve seen a flurry of appchains and Layer 1 blockchains having either launched or announced their arrival on Cosmos, such as dYdX, Kujira, and Mars Protocol, with most of these blockchains revolving around a central limit orderbook (CLOB) DEX. Sei differs by possibly achieving block times of around 0.9 seconds and an innovative orderbook model.

Read more details here as we dive into its architecture, security, tokenomics, and ecosystem.

In our monthly reports, we provide deep analyses on the current general on-chain/off-chain market sentiment and NFT ecosystem using data provided by Nansen.

With the prospect of a post-Merge Ethereum PoW fork around the corner, we were curious as to whether smart money has been speculating on the ETH PoW hard fork. As such, we dived deeper into the on-chain activities of smart money to answer this question.

Read here for the full report.

The crypto market has been moving sideways after the steep plunge last Friday, with traders awaiting Jerome Powell’s keynote for clues on how far the Federal Reserve will go to bring inflation back to control. Both BTC and ETH remain in range trading with minor price fluctuations, which nonetheless have triggered significant declines in future funding rates,indicating less optimistic sentiments. 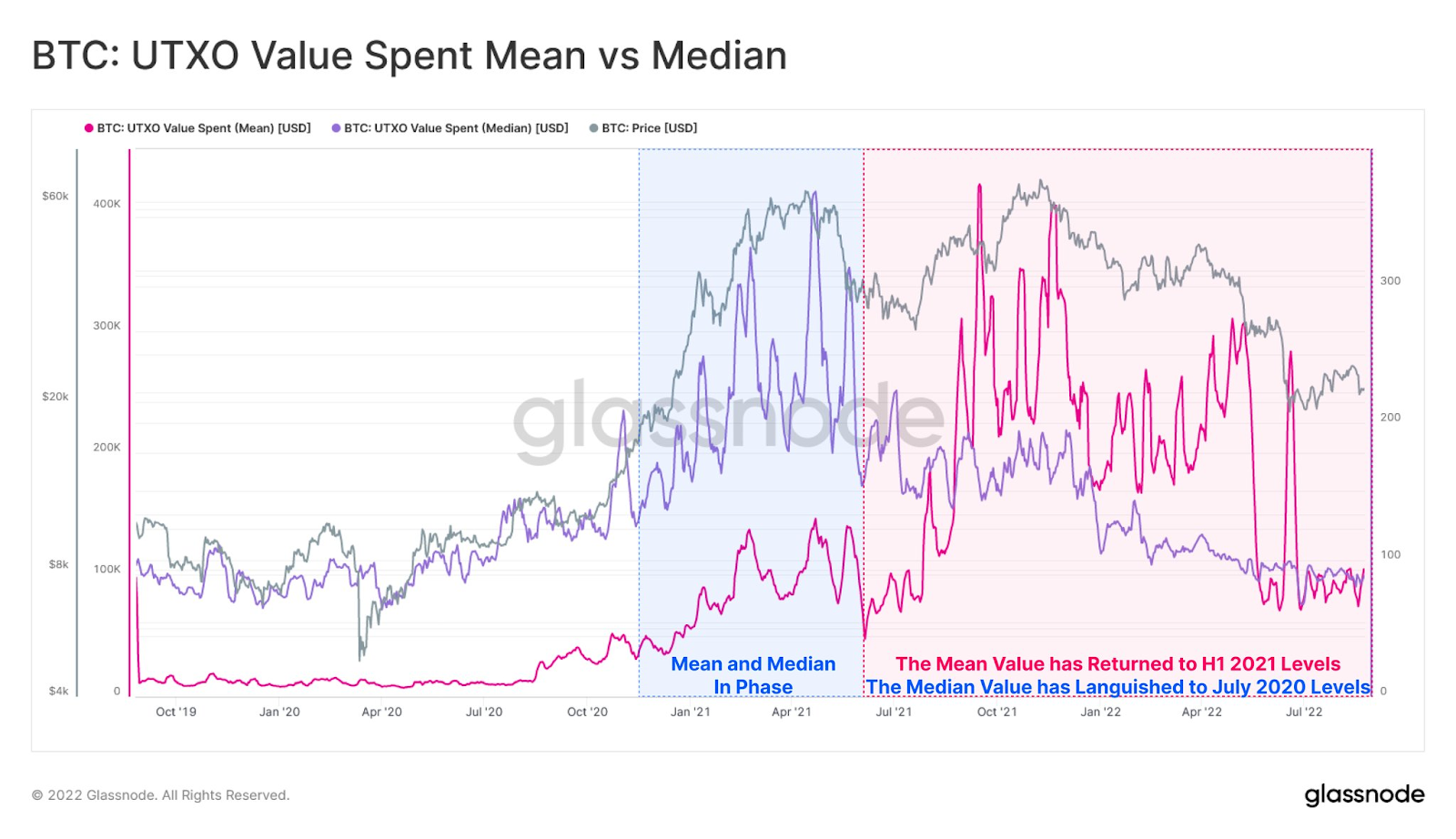 The median spent output is in structural decline, forming a stark divergence with the mean, and marking a period of transition with respect to network usage. The divergence between elevated mean and plummeting median suggests that the network’s average UXTO spending is dominated by large transactions, while retail participation remains scarce.

However, the accumulation in trend score indicates that after crossing above the realized price, the persistent accumulation behaviors among small-time retailers and whales began to weaken. HODLers from all cohorts have seized the opportunity to distribute their holdings, adding selling pressure to the market. After the sell-off last Friday, small-time retailers seem to be the only cohort that is still accumulating, albeit on a lesser scale. 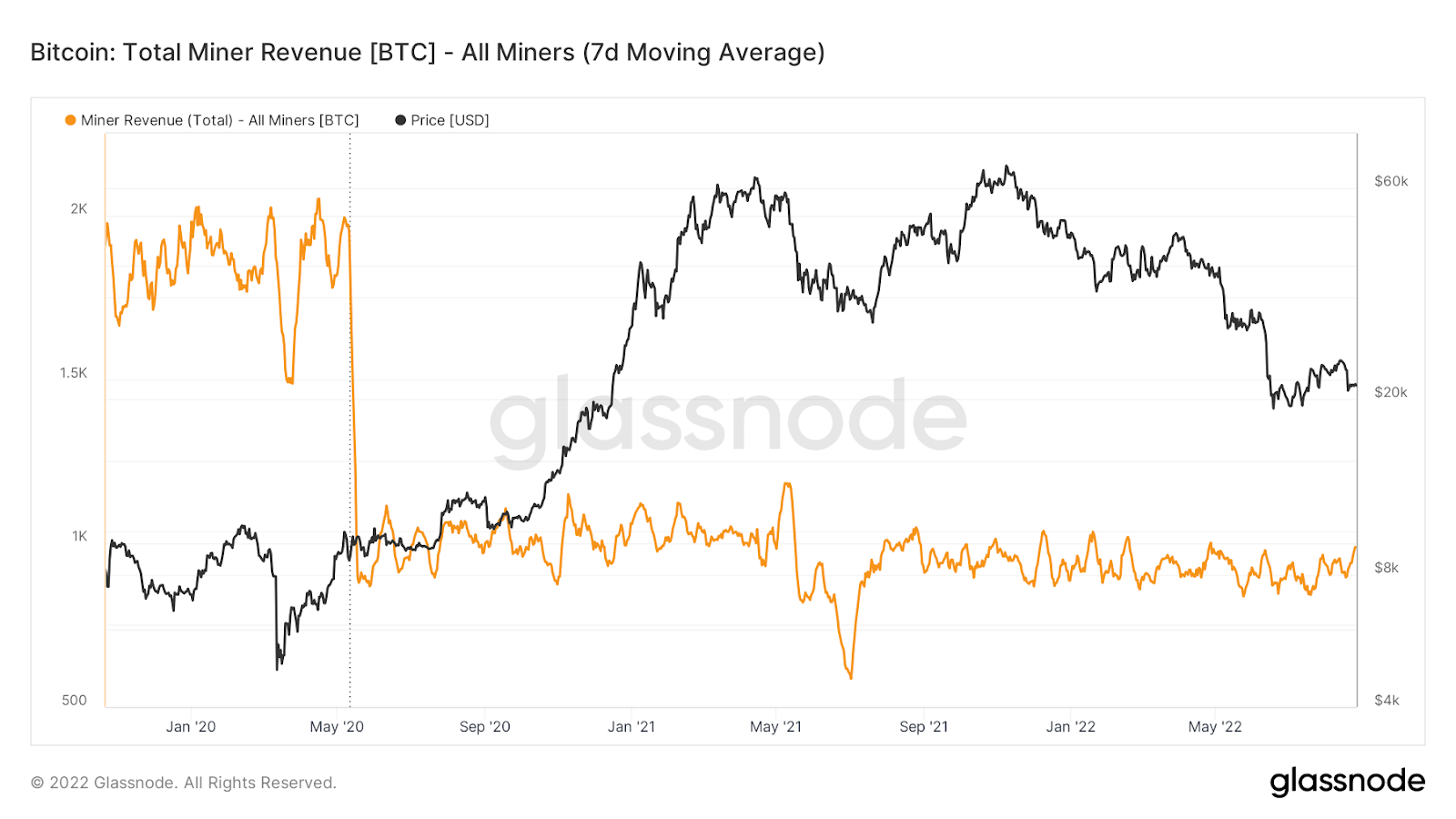 The mining profitability for BTC miners continues to trend down as daily transaction fees, which make up 1.28% of miners’ revenues, plummet to levels last seen in 2020. The level of transaction fees is heavily dependent on the daily transaction volume, which is currently at a historical low, and the changing supply and demand dynamics of block size.