Sudoswap is a decentralized NFT marketplace where users can buy, sell, and swap NFTs. On July 8, 2022, Sudoswap launched its modular NFT AMM protocol, which adopts the same AMM models used for token trading. Although not the first of its kind, the launch of its AMM gained significant traction as it introduced much needed liquidity into the NFT market.

The Sudoswap AMM facilitates swaps for NFTs (ERC721) to ETH or ERC20 tokens and utilizes a range of customizable bonding curves. Users can also perform NFT to NFT swaps by calling the router function, which essentially swaps an NFT for tokens, and tokens for another NFT in a single transaction. The protocol currently has three types of bonding curves:

The spot price of an NFT token is equal to the instantaneous price of selling one NFT to the pair. When buying an NFT token from the same pair, the spot price is adjusted upwards by one unit of delta, whose value is determined by the pair’s bonding curve.

To further illustrate the above, let’s assume there is an MAYC/ETH pair with a spot price of 4 ETH and a linear curve with a delta of 0.1 ETH (assume zero fees). A user selling one NFT to the pair will receive 4 ETH for their MAYC, while a user buying one NFT from the pair will have to pay 4 + 0.1 ETH.

As shown above, liquidity providers (LPs) can deposit into single-sided buy or sell pools, or provide both sides to capture fees.

As of the time of writing, Sudoswap has had no VC backing or fundraising and will instead rely on its token drop to fund the protocol and pay its contributors. 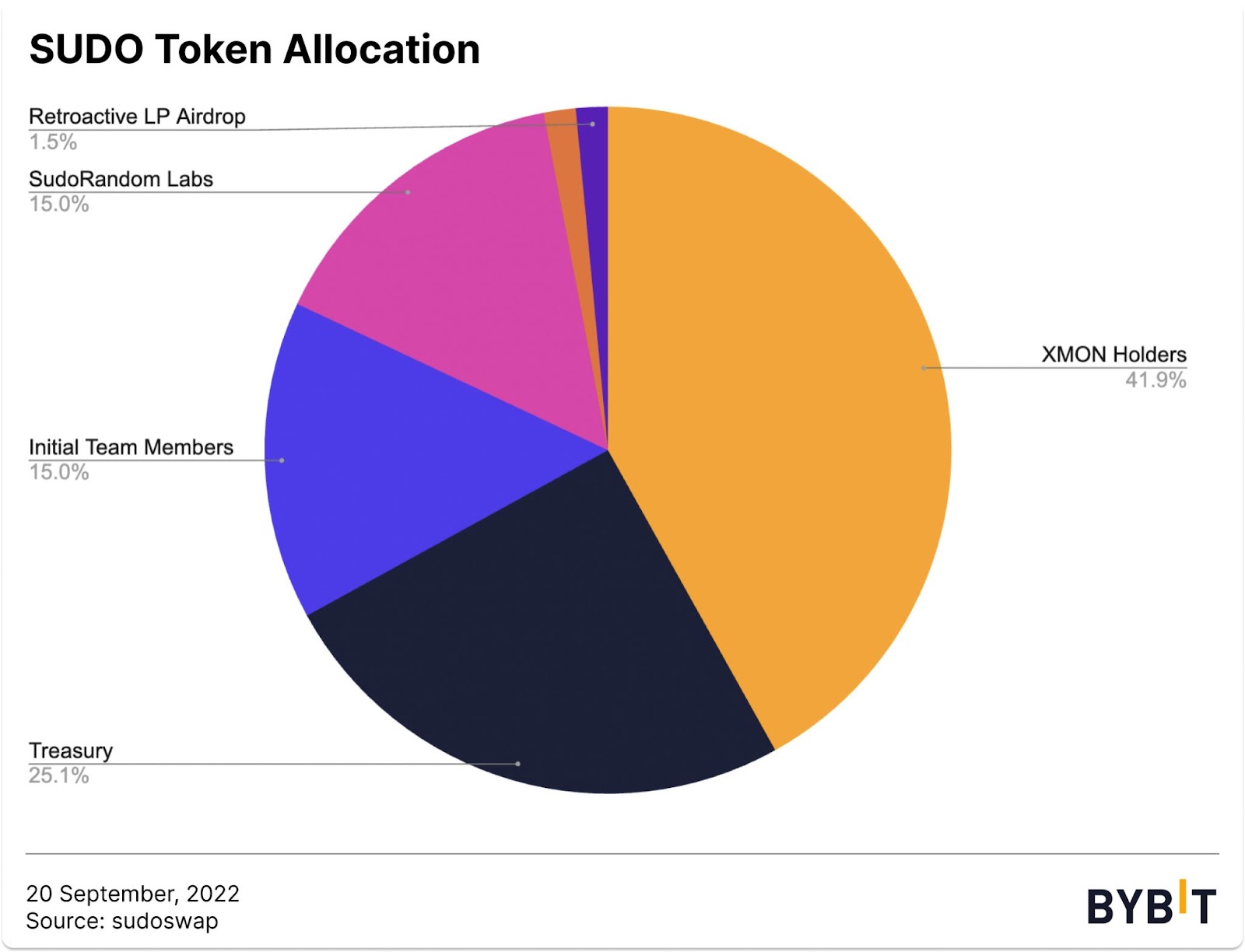 On Sept. 1, 2022, Sudoswap released details about the upcoming SUDO token (launch date yet to be determined). SUDO will have an initial supply of 60 million tokens. At launch, 44.9% of the initial supply will be airdropped to XMON holders (41.9%), 0xmons holders (1.5%), and LP providers (1.5%) and will be liquid, as there are no vesting terms.

In order to receive their SUDO tokens, XMON holders can participate in a lockdrop event. XMON tokens will be locked for three months, at the end of which can be withdrawn again. The amount of SUDO tokens received will be at a rate of 10,000 SUDO per 1 XMON locked. There are a total of 10,000 XMON tokens, 74.88% of which are held in the team’s treasury and not eligible for the airdrop. Any unclaimed SUDO tokens will be sent to the treasury.

As it is a retroactive airdrop, Sudoswap LPs before block 15455555 will receive 1.5% of the initial supply.

SUDO holders will govern the treasury and be able to utilize the treasury for grants, future contributor compensations, bug bounty programs, etc. Note that governance will be able to mint more SUDO into the treasury, at a max inflation rate of 10% per year.

A total of 30% will be allocated to team members (we assume SudoRandom Labs to be largely overlapping with the team allocation at present).

Since the announcement of the SUDO token distribution, Sudoswap has received backlash from community members who were not happy with the amount of tokens going to XMON holders (41.9%) and team members (30%). Most were also unhappy that none of the SUDO tokens have been allocated to Sudoswap users who traded on the platform. However, 0xmons had previously communicated his intention to allocate a generous amount of tokens to the team and XMON holders to reward the loyalty of the community as well as the team’s contribution. 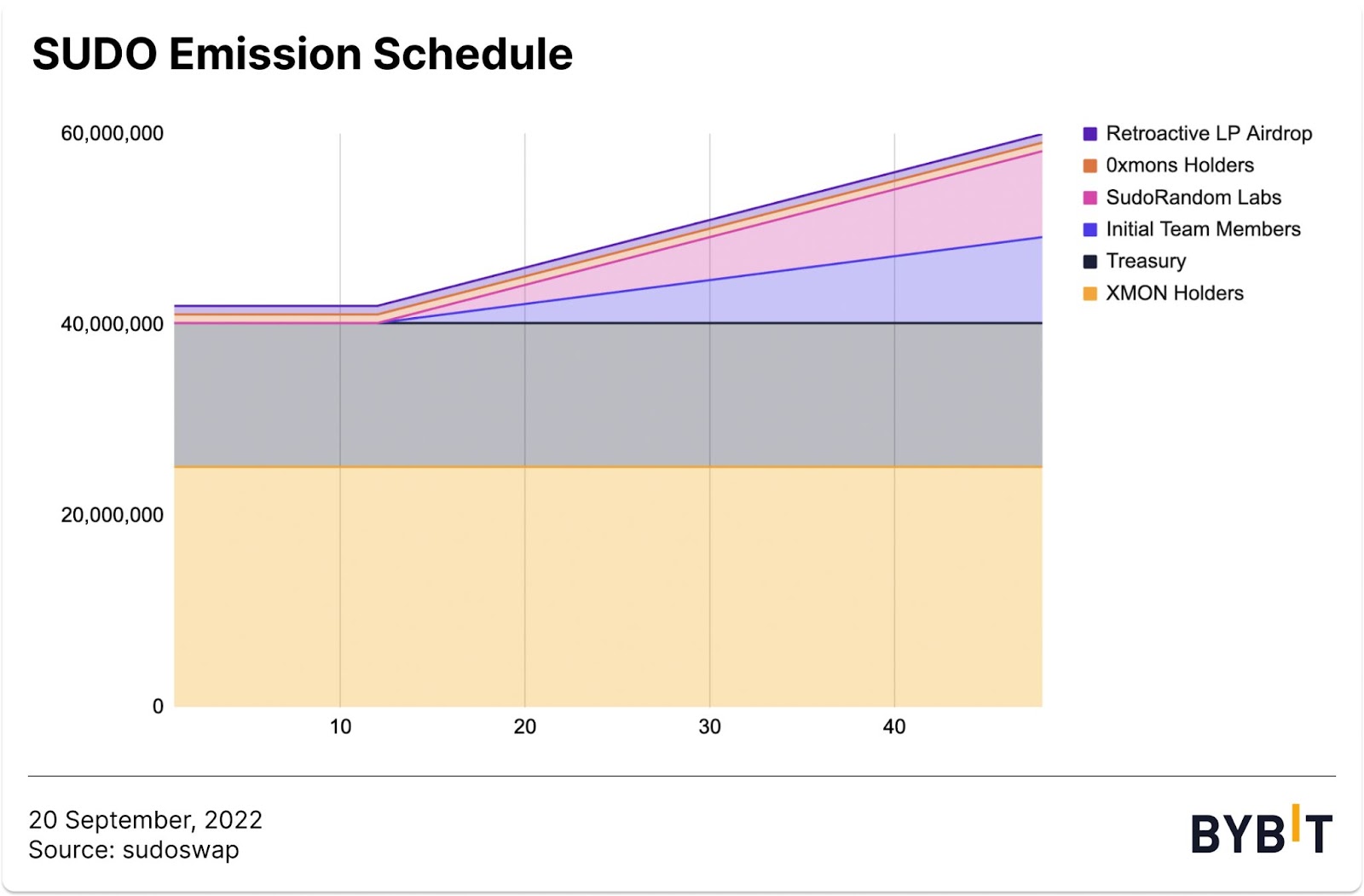 Thus, SUDO’s emission illustrated as above. Note that SUDO will initially be non-transferrable and only be in circulation when the team is assured of sufficient governance participation. As such, we expect a portion of the treasury to be distributed as SUDO staking rewards in order to incentivize governance. Otherwise, we would expect a significant sell pressure once it is unlocked due to the large amount (up to 70%, including treasury tokens) of liquid tokens that will be in circulation.

Sudoswap contracts were audited by ABDK Consulting and Spearbit. As of the time of writing, there are no bounties posted by the team. As mentioned above, the team indicated that treasury funds may be used for the purpose of bug bounties. 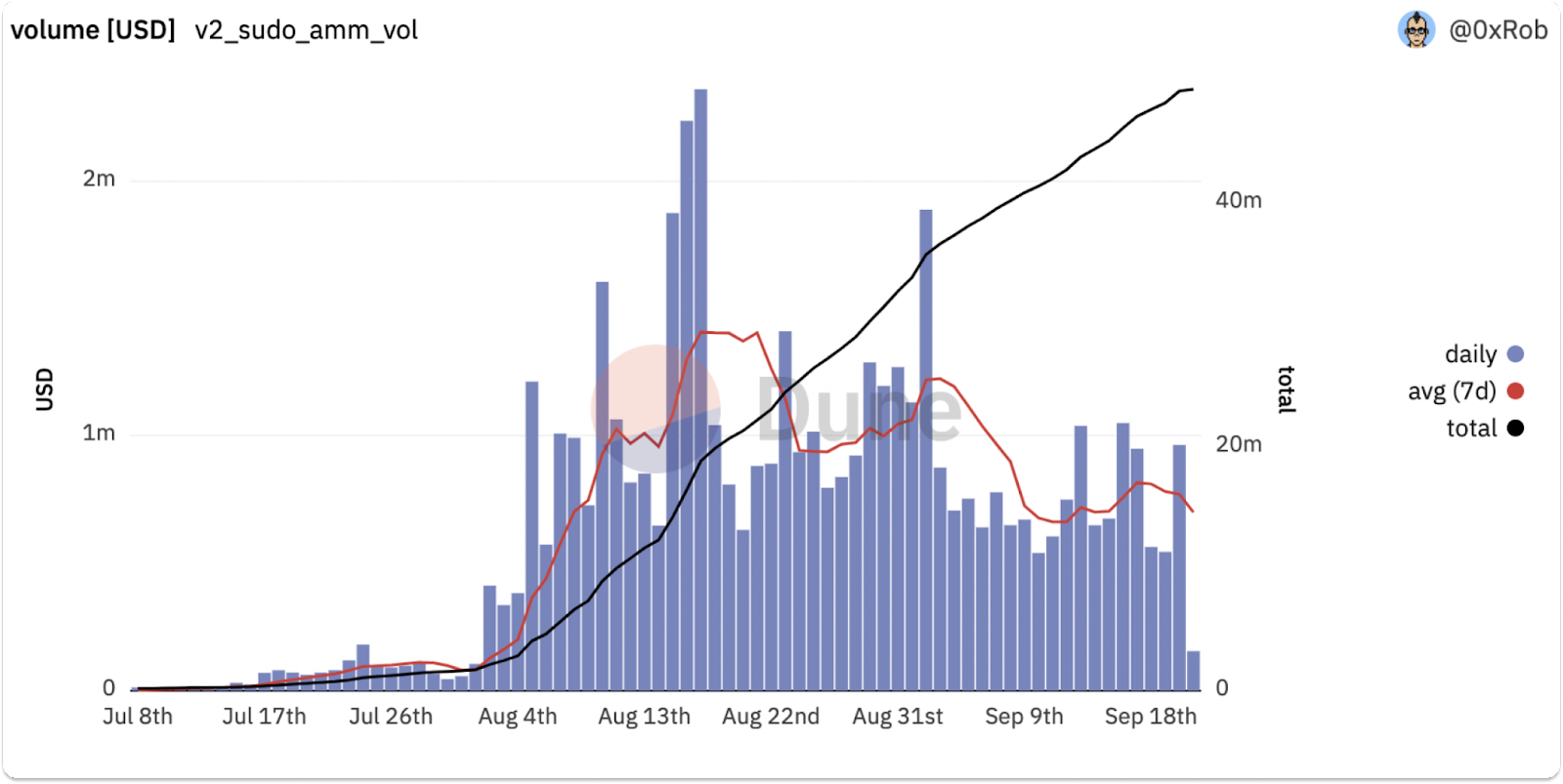 Although it took some time for Sudoswap to see some traction, trading volume exploded a month after launch before reaching its peak of around $2.3 million on Aug. 17, 2022, and more than $49 million in total volume after 164,000 NFTs traded. Since then however, volumes have declined and leveled out. This seems to be in line with the flat performance of the broader NFT market, as seen below. 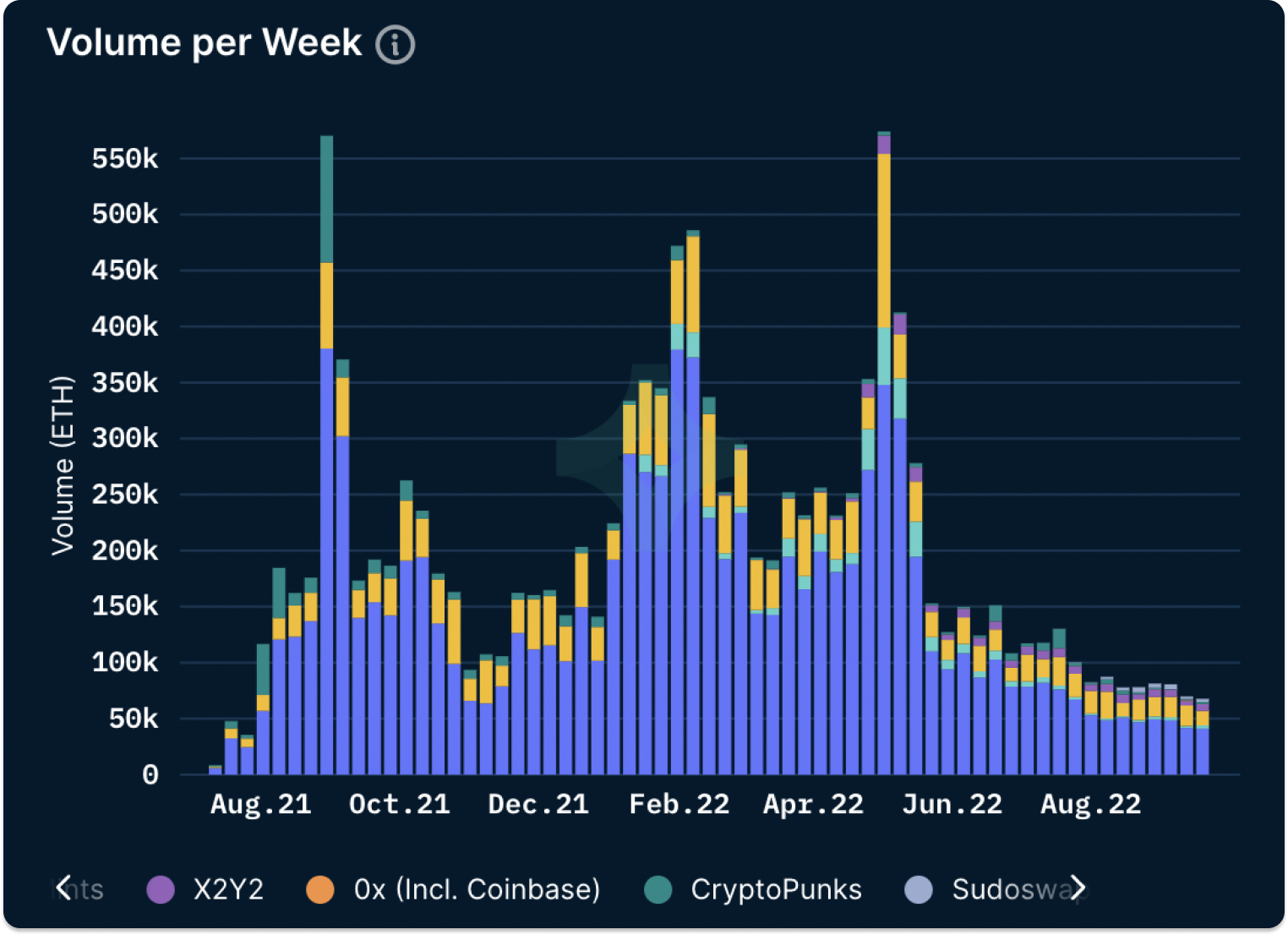 A similar trend can be seen in the platform’s active users. The protocol saw a huge growth in users, peaking at the end of August before declining and flattening out to around 500 daily users during the past month. As of the time of writing, the protocol has amassed nearly 24,000 users. 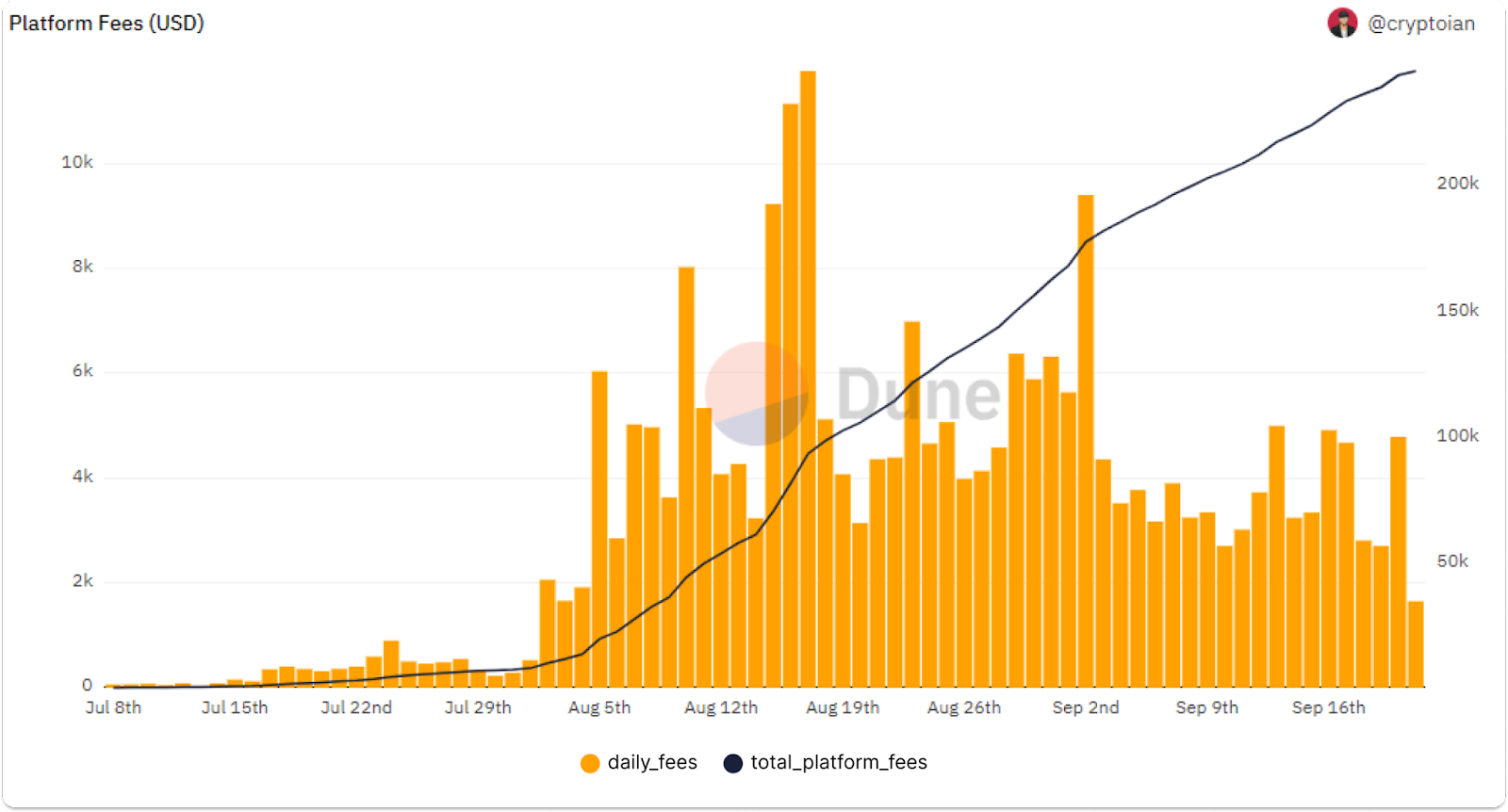 Since its inception, the Sudoswap AMM has collected over $240,000 in platform fees — or around $1.6 million annualized. Although not indicated as such, one might guess that protocol revenue may be shared with SUDO holders or distributed to the SUDO-governed treasury in the future.

With an annualized protocol revenue of around $1.6 million, this is hardly enough to sustain operations. Thus, unless it receives external funding it is justifiable that the contributing team will be receiving a generous amount of SUDO as compensation (should there be no further changes). However, leaving out Sudoswap users completely may be suboptimal judgment on their part.

Sudoswap’s trustless nature has also resulted in a growing number of scams, as explained here. Scammers were able to trick users into swapping their valuable NFTs for fake NFTs. Thus, users need to conduct due diligence before approving deals on the platform.

Although Sudoswap’s NFT AMM protocol caught the attention of many since its launch, protocol growth is still largely dependent on market conditions as poor NFT volumes across the board have affected its growth trajectory. However, being an AMM protocol does bring much needed liquidity and utility to the NFT market — this is evident with its baseline usage and trading volume.

Sudoswap should be well positioned to benefit should NFT volumes start to grow again. Although the indicated distribution has not been well received, the SUDO token launch should allow the community to be more involved in the direction of the protocol and potentially benefit from protocol revenue in the future. The success and innovation of Sudoswap will be encouraging to many looking to build similar infrastructure to facilitate and benefit from the next bull cycle of NFTs.