Major U.S. equity rebounded overnight as Nasdaq 100 notched a three-day win streak. Fed Chair Jerome Powell’s speech did not give extra clues to Fed’s next move, while investors wait for Thursday’s December CPI print. Meanwhile, the broader cryptocurrency market follows the footstep of equities, with Bitcoin and Ether up 1.35% and 1.01%, respectively, in the past 24 hours. The top mover for today, Aptos, which registered a 24-hour return of 6.6% and 40.7% return in the past week, has outperformed the market, likely due to a short squeeze, fading impact from FTX’s collapse, and PancakeSwap’s further deployments. 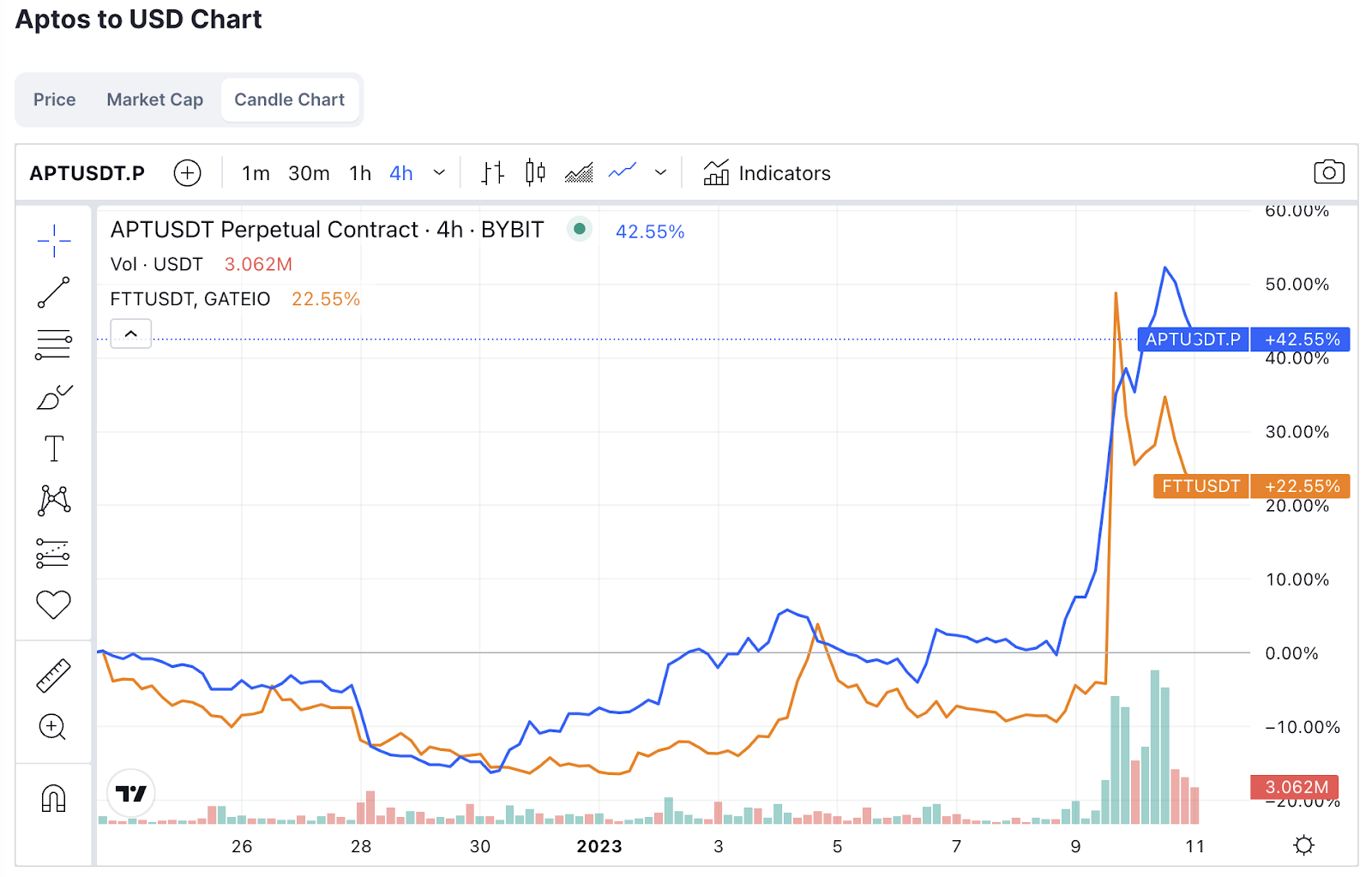 APT is the native token for a Layer 1 blockchain, Aptos, which was hailed as the “Solana Killer” upon its mainnet launch in October 2022. The emergence of Aptos comes with much fanfare due to its strong venture capital backup with investors including a16z and FTX Venture, and the adoption of the Move programming language.

The recent outperformance of APT can be attributed to the following reasons. It began with the short squeeze following APT’s price rebound after its token price dropped from $13 to $3 in Q4 2022, with short liquidations surging starting in early 2023. Following which, APT’s price movement followed in FTT’s footsteps, likely due to its FTX linkage. As the FTX saga continues to unfold, FTX-linked tokens, which suffered huge losses in the aftermath of FTX’s fallout, have pared some early losses. Finally, Aptos has seen an increased adoption as the PancakeSwap community ,approves, further deployments on the network.

Check Out the Latest Prices, Charts, and Data for ,APT/USDT,! 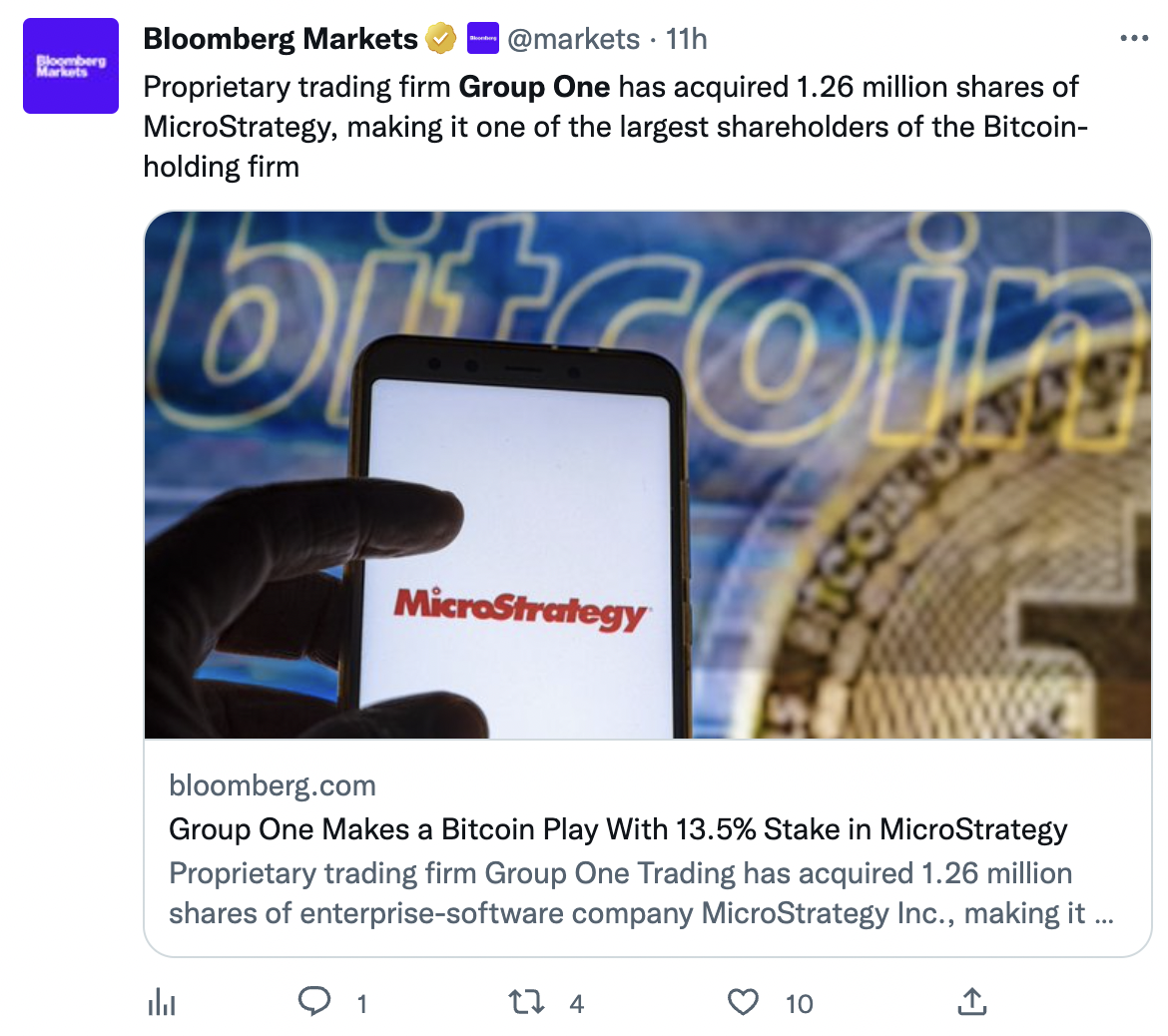 Group One Trading, the proprietary trading firm that focuses on market-making in U.S. equity options, has taken a massive position in the options to buy 1.3 million MicroStrategy shares, according to ,Bloomberg,. MicroStrategy has been known for being the largest public holder of Bitcoin, owning 132,500 BTC as of December 28, 2022, equivalent to $2.3 billion. MicroStrategy’s listed share, MSTR, has been tracking the Bitcoin price closely since the firm started its first Bitcoin purchase in August 2020. Group One’s intention is unknown. Nonetheless, it is likely the trading firm has regarded MicroStrategy as a Bitcoin proxy because there is no spot Bitcoin ETF in the U.S. If Group One exercises the option, the trading firm will hold 13.5% of MicroStrategy’s total outstanding shares.

FTX assets draw interest from over one hundred parties. (,Link,)

Russia is reported to work on a cross-border settlement system using CBDC. (,Link,)

Twitter is reported to develop features to reward users with coins. (,Link,)

BUSD was not fully backed previously, but the issue has been resolved by Binance. (,Link,)