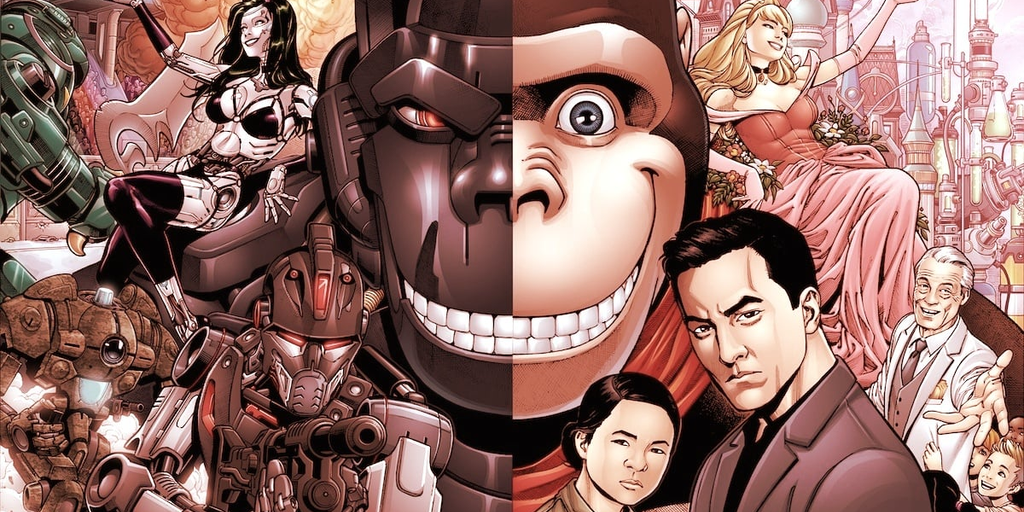 With the help of Web3 startup 247 Comics, Chen is developing a new NFT-driven comic book series called “Genesis”—and for the first time, he’s stepping into the writer’s seat, as well.

“Genesis” follows Asian-American scientist Lucas Zhang and his daughter, who have a tenuous relationship. It grapples with concerns surrounding robotics, massive corporations, militarism, and immortality. It even includes biting allusions to Disney—all while offering a mix of dark humor and sci-fi action with characters Chen dreamed up himself.

The story’s first issue offers a variety of vignettes to set up the world. Gritty military scenes of giant robots with remote human operators are juxtaposed against the pastel theme park of Bobo World, a place that’s cheery on the surface but provides darker experiences for adults.

Chen will offer fans Ethereum NFTs of the work’s characters, with the aim of providing readers with a new sense of ownership and fandom in the digital age. Chen and 247 Comics Publisher Carl Choi have already released one of the characters—a giant gorilla named Bobo—as a fractionalized NFT which acts as an early-access pass to selected 247 Comics content.

The “Biplane Bobo” NFTs alone have seen over 553 ETH (nearly $900,000) in total volume traded so far. Chen and Choi shared that plans for more characters to become NFTs is likely on the horizon, although most probably won’t be fractionalized like Bobo.

Over the course of his career in comics, Chen worked for Marvel, DC Comics, and Valiant. But while he was prolific and worked on comics based on some of the best-known characters in entertainment, Chen told Decrypt that making a living in the traditional comics industry is an ongoing struggle for many artists.

Echoing familiar refrains from other creators in the industry, Chen explained that while comic book publishers have raked in profits from blockbuster movies and valuable licensing deals, little of that revenue has trickled down the corporate ladder to the actual comic book artists.

In fact, some comic creators, like Thanos creator Jim Starlin, have fought back against Marvel for fair compensation when their characters are used to power successful movie franchises. And Ed Brubaker and Steve Epting, who developed the Winter Soldier storyline which was then adapted for film “Captain America: The Winter Soldier,” said in 2021 that all they got was a “thanks here or there” from Marvel.

“What really got me is that those movies—obviously everyone’s seen them, and they’re all household names and they’ve done phenomenally well,” Chen told Decrypt. “And they made Marvel and Disney a lot of money.”

“But it was born from ideas from creators who, a lot of times, they’ve aged out [of the industry] now and they can’t afford health care. They’re just in really bad shape,” he continued. “A lot of that doesn’t filter back to the original creators.”

In fact, Chen himself believes that he has had a major influence over Marvel’s cinematic portrayal of Iron Man. Chen worked on dozens of issues of “Iron Man” during his time with Marvel, as well as many issues of “Wolverine” in which Iron Man appears.

Choi explained that Chen’s Iron Man designs “are often used by Marvel licensing as brand guides for vendors looking to license the property.” Chen also confirmed that Marvel has repeatedly cited his Iron Man take as a key reference.

“My run on Iron Man falls in a sweet spot where much of the classic, iconic look [is] mixed with the modern day aesthetics,” the artist told Decrypt.

Decrypt reached out to Marvel for comment regarding the use of Chen’s Iron Man designs and its approach to compensating creators for movie and media use, but did not immediately hear back.

While finding success—especially financial success—as an artist in the comics industry is far from certain, Chen still saw the jump to Web3 as a risky, but important move.

“I’m in a fortunate position where I don’t really need to desperately work to put food on the table,” he told Decrypt. “So that allows me to take the big gamble and do some writing for the first time and actually take control of the project, and then have this bold way of putting it out.”

But the comics industry has already seen backlash against NFTs, as many expressed frustration at the likes of “Judge Dredd” co-creator Pat Mills and the estate of Marvel legend Stan Lee for releasing NFTs.

Image Comics similarly took flak in 2022 for putting a Bored Ape Yacht Club NFT character on a comic book cover, and Archie Comics still has yet to launch its Archieverse initiative—which would see it build a virtual writers’ room of NFT holders—after significant pushback to last year’s announcement.

“There’s a lot of resistance from the community,” Chen said. “They really want to cling to the way things were done in the past, which I’m not sure why—because for the most part, it’s not very successful.”

Like many musicians, filmmakers, and creators leaning into Web3, Chen sees NFTs and tokenization as a way to establish a more direct connection between artists and fans.

“This new model, it’s more from creator to the reader or consumer,” he said, adding that the traditional comic industry is anchored by companies that are “just a machine” and that the model “exploits a lot of the creatives” behind the books.

While he does see some past profile picture (PFP) NFT projects launched by others as “cash grabs,” Chen doesn’t think that means people should give up on the technology or its potential.

“I think most people with a brain can kind of see this is where things are going,” Chen said of “digital collectibles,” a term that some companies—like online community platform Reddit—use as a synonym for NFTs.

As he looks to the future of comics, Chen isn’t concerned about traditionalists who prefer physical issues over digital. He believes his own work “looks much better on digital,” and that digital experiences help readers “actually enter the space” and engage.

The Web3 comics world is, as of now, but a fledgling industry. That said, Chen and 247 Comics will have to compete with the likes of “The Hunger Games” co-producer Bryan Unkeless and his team developing “Runner,” as well as the Huxley NFT comics created by noted concept artist Ben Mauro that have yielded nearly $9 million worth of trading volume to date.

Regardless of pushback from some fans and the uncertain path forward, Chen remains optimistic about the future of Web3 comics.

“This is the first thing that’s a real paradigm shift in the way comics are consumed,” he said.

What's Going On With the Price..