Fuel: The Future is Modular

Fuel: The Future is Modular 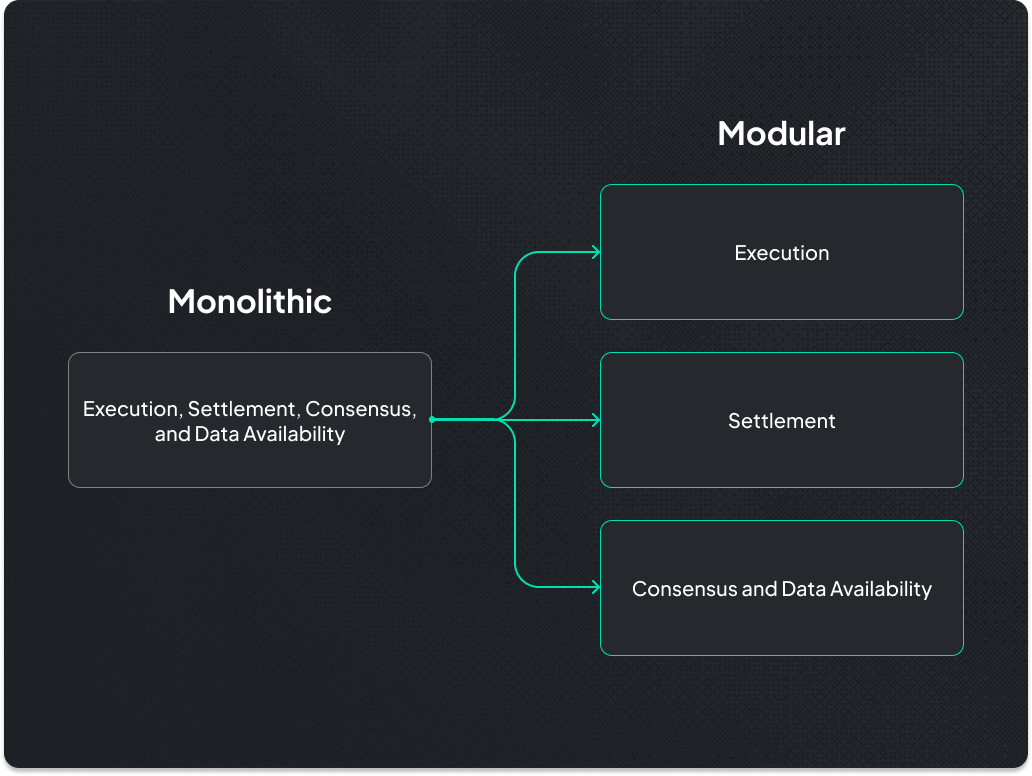 Unlike monolithic blockchains (i.e. Bitcoin, Ethereum, Solana), modular blockchains separate four core features of a blockchain: execution, settlement, consensus, and data availability. However, this has resulted in expensive and slow transactions as well as scalability issues, since these core functions all compete for the same resources.

Fuel was developed by Fuel Labs in 2019 as the first optimistic rollup solution to solve Ethereum’s scalability issues. Today, Fuel has evolved into a modular execution layer solution for monolithic Layer 1s via its v2 iteration. The defining features of fuel include parallel transaction executions, its proprietary virtual machine, FuelVM, as well as developer tooling, Sway Language and Forc.

Fuel was founded in 2019 by John Adler and Nick Dodson. Adler has a background in Electrical and Computer Engineering, and was a blockchain researcher at ConsenSys where he pioneered the optimistic rollup design. He is also the co-founder and chief research officer at Celestia, a modular blockchain network enabling L2 rollups on Cosmos. Dodson, who describes himself as a drummer “busy with some other things”, was one of the earliest Solidity coders on Ethereum. He later joined ConsenSys where he worked on crowdfunding and governance applications before he left to co-found Fuel with Adler.

Fuel has successfully raised a total of $81.5 million in funding on two separate occasions. In 2021, they raised $1.5 million in a round (non-equity assistance) led by CoinFund with participation from Fenbushi Capital and Origin Capital.

Just this month, Fuel Labs announced an $80 million venture round led by Blockchain Capital and Stratos, with participation from Alameda Research, Maven 11 Capital, and Spartan, among others. This raise will aid Fuel Labs in their vision to build a high performance modular execution layer. 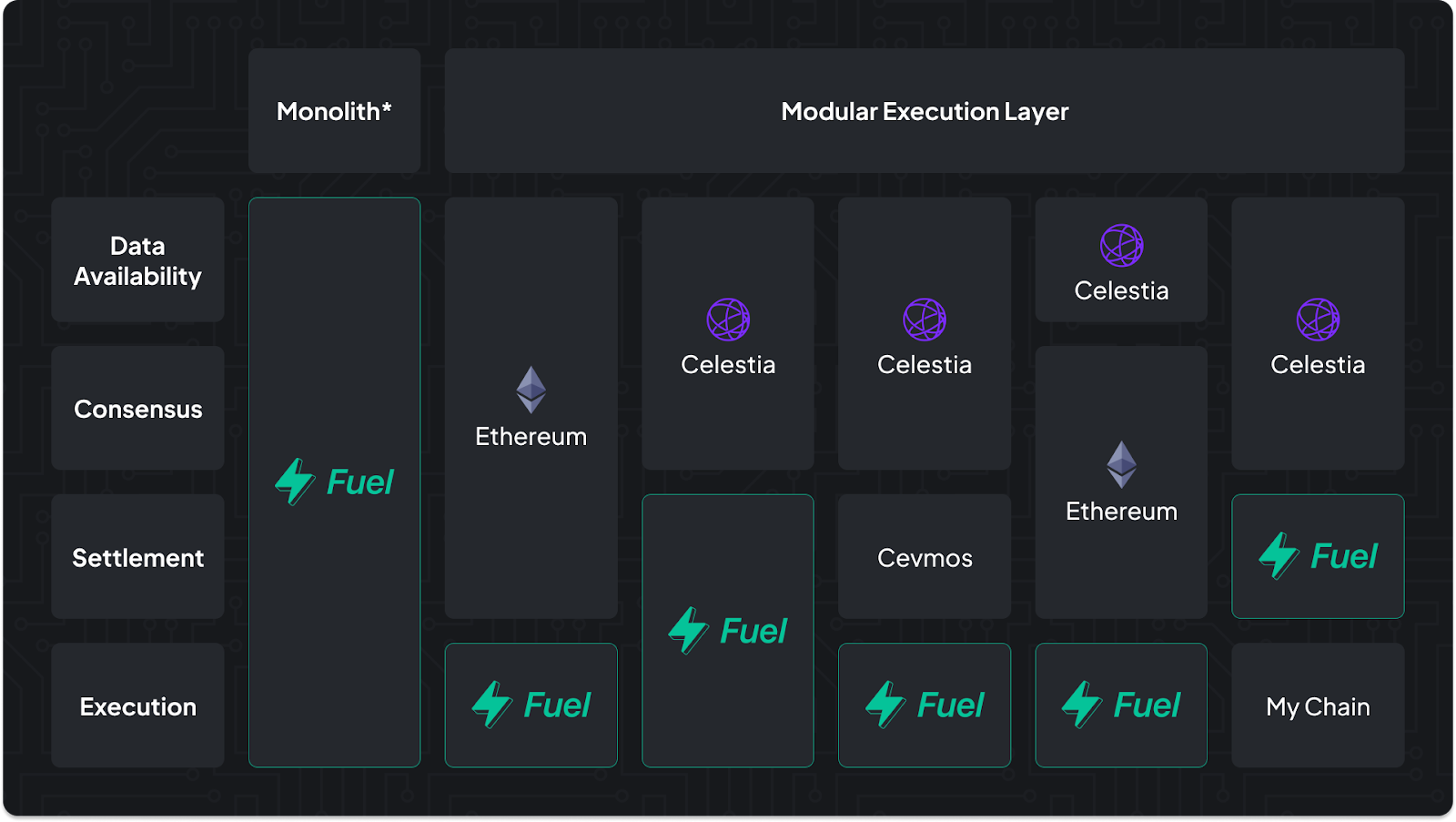 Fuel is designed to be modular and can be operated in different configurations — even as a monolithic Layer 1. Fuel can also be configured as a rollup, state channel, or as a sidechain.

As a rollup, Fuel is agnostic to both optimistic or zk-based configurations for fraud proofing, and is optimized to handle large amounts of Layer 1 bandwidth, unlike typical Layer 2 and rollup solutions.

With FuelVM, Fuel is able to function as a state channel by utilizing FuelVM’s deterministic state system.

State channels are smart contracts that facilitate secure off-chain transactions, relieving pressure on the main network. A large number of transactions can be carried out off-chain and parties only need to submit two on-chain transactions to signal the opening and closing of the channel. As a sidechain, Fuel handles the data availability layer, leaving settlement for the Layer 1 chain.

Ethereum, along with many other smart contract based blockchains, adopt an account-based model whereby tokens are represented as a balance in an account which are controlled by a smart contract or private key. Thus, the network has to keep track of all balances and update its state by processing transactions sequentially and batching them into blocks — each new block is a new state. This results in a natural cap of network speeds and an inefficient use of hardware (multi-threaded processors). 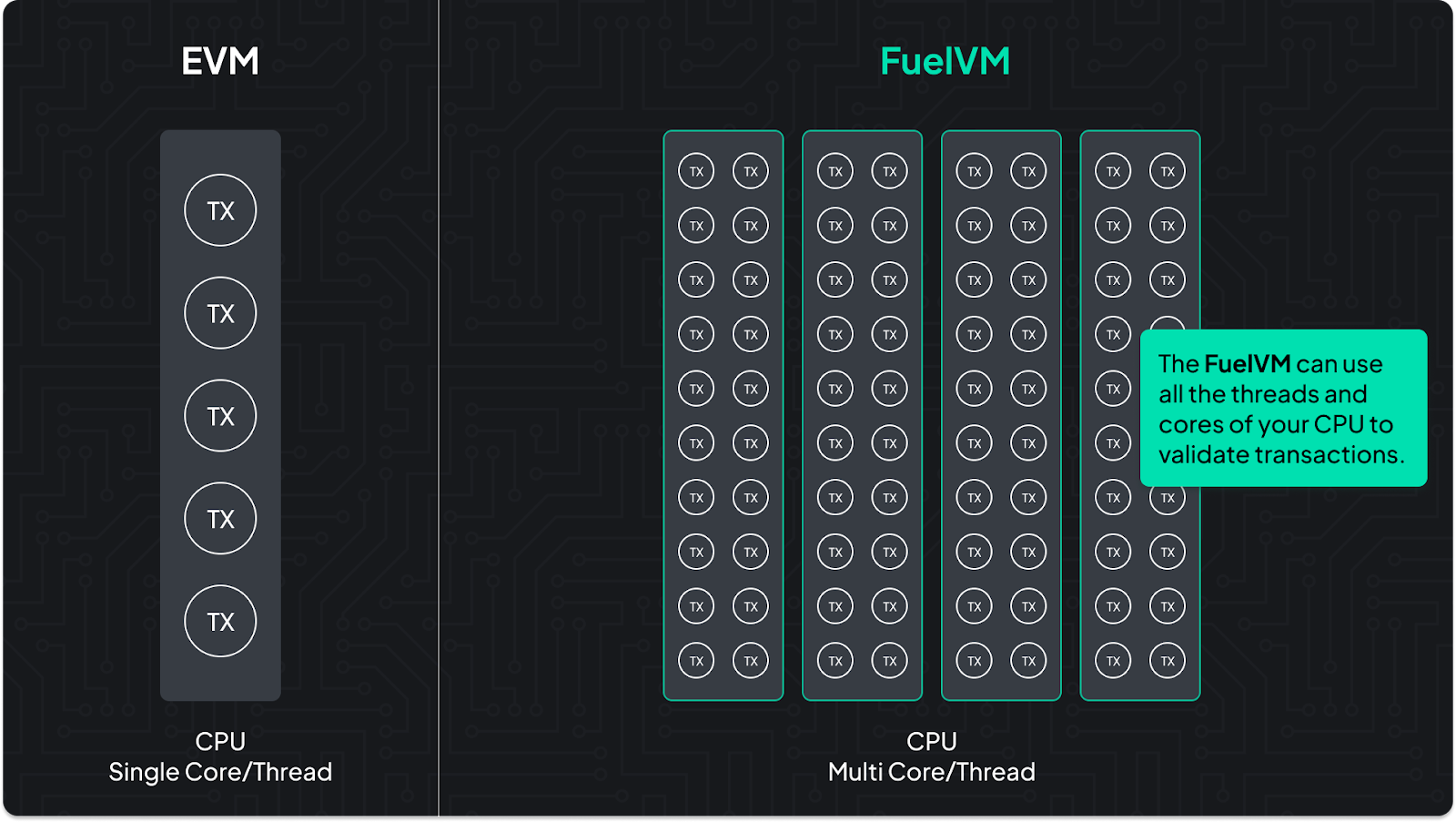 Fraud proofs provide evidence that a state transition was incorrect. This verification method is typically utilized in optimistic rollups, since the default state is that all states are correct unless proven otherwise. Fuel and FuelVM utilize UTXO for its fraud proofs, which require each spend of a UTXO to point to the creation of the UTXO, and thus makes parallelization easier compared to general-purpose fraud proof mechanisms.

FuelVM is a virtual machine sharing similarities with EVM, WASM, Solana’s SeaLevel, and Bitcoin’s BVM. FuelVM was built to optimize for modular execution architecture as well as work over a UTXO model. The Fuel docs outline in detail a comparison between FuelVM and EVM.

Unlike EVM, which has ETH as its native token, FuelVM has built-in support for multiple native assets. This means that the sending and receiving of any native asset can be done independently of the token contract.

Sway is a Fuel proprietary programming language and is a domain-specific language for FuelVM. Sway combines the smart-contract-paradigm language, built-in top-level contract storage, and ergonomic and safe contract programming standards from Solidity with the syntax, borrow checker, and safety-first semantics of Rust.

As of the time of writing, there have been no audits carried out. The team indicated that this is currently a work in progress.

Fuel is currently in public testnet. As of the time of writing, only SwaySwap, an open source Uniswap v2-based DEX where users can swap native (Ethereum) assets, is live. SwaySwap was built using Sway and is optimized for FuelVM.

There are a number of other projects building on Fuel, a list of which can be found here. The list is non-exhaustive and consists of DEXs, an NFT marketplace, lending protocol, and a name service. Because Fuel is permissionless, developers can deploy contracts to the testnet without needing governance approval.

On June 9, 2022, Fuel published a list of hackathon winners and notable participants that participated in their hackathon on May 27, 2022. Projects include a stablecoin AMM, multisig predicade, oracle, and an NFT token contract, among others.

We tried SwaySwap, which is running on a persistent Fuel devnet, and were impressed with how fast it was. Swapping tokens did not feel like the typical dApp where a user has to wait for transactions to be approved or executed. However, the real test will be to see if such performance can be maintained on the mainnet.

Although Fuel can be configured to work with other Layer 1s, or in conjunction with other modular infrastructure, the current focus is on releasing Fuel v2 for Ethereum. The team indicated that a public roadmap would be released soon in this regard.

As development on Fuel picks up, we should start to see more protocols launched on testnet, and we are already seeing core DeFi primitives in development as discussed above. Since FuelVM shares a lot of similarities with EVM, the learning curve to start developing on Fuel should not pose a hindrance to its growth. In fact, to attract development teams and existing projects, Fuel has programs offering grants ranging from $10,000 to $150,000. Grantees unlock funds based on completed milestones and the team has indicated that they will be sharing more details on existing grants in the near future.

With Ethereum’s future looking to be a rollup-centric one, Fuel brings a refreshing take to the table, offering modularity with its highly customizable infrastructure over a UTXO model. Unlike typical rollups, Fuel looks to be able to scale the execution layer even further without sacrificing security, while keeping costs low. We will definitely be keeping a close eye on Fuel for its upcoming developments.

Intellectual property has an a..