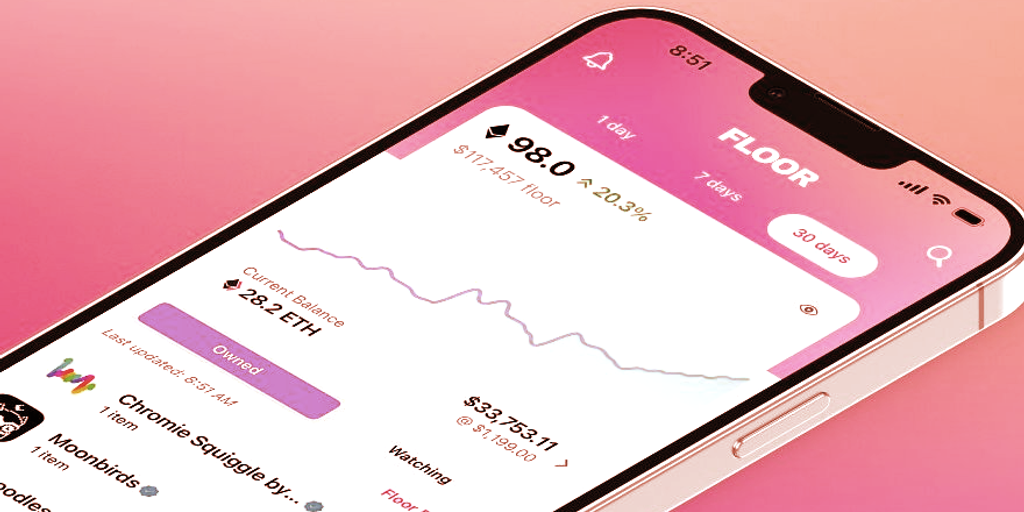 Floor, the startup behind the NFT portfolio app of the same name, raised $8 million last year and claims sizable growth for its token-gated app amid the NFT bear market. The firm has now unveiled the next step in its plans to grow both its feature set and audience, announcing today that it has acquired NFT analytics platform WGMI.io.

While Floor delivers a streamlined way for NFT collectors to view and track their holdings, WGMI.io is focused on analytics around market activity and trading trends. Together, they aim to deliver richer features for Floor users while bringing WGMI’s analytics features to a potentially broader audience.

“There were big chunks of what they do that we thought could help accelerate us,” Floor CEO and co-founder Chris Maddern told Decrypt.

Maddern added that he saw “a real interest and passion” from WGMI founder Thomas Mancini in expanding the platform’s features and functionality beyond its relatively small audience of die-hard “degen” traders, and that there was “a ton of alignment” on a united path forward. Terms of the deal were not disclosed, but Mancini has joined Floor full-time.

Floor debuted in October 2021 to an initial audience of users that minted its Generation I membership pass NFTs, providing access to the token-gated iOS and Android app. The platform expanded via word-of-mouth amongst traders and through subsequent NFT mints in the months that followed.

Building in the bear

By the time Floor’s funding was announced, the NFT market was entering what would prove to be a precipitous decline in both trading volume and asset prices, in parallel with crumbling crypto prices and high-profile collapses. The NFT bear market conditions only worsened over the course of the year, aside from a slight uptick in sales in December.

Even as broader momentum and hype around NFTs diminished late last year, Maddern and Hall told Decrypt that Floor steadily grew its user base, even while remaining gated behind an NFT access pass. It partnered with major projects like Doodles and Proof to provide NFT holders with access, and let existing users airdrop passes to friends to onboard them into Floor.

That led to what Floor claims is a 700% increase in users amid the bear market, with more than 10,000 total active users that have thus far connected over 22,000 total crypto wallets to track their assets. The firm further says that Floor users accounted for 8% of sales on leading NFT marketplace OpenSea in December, pointing to an audience of plugged-in traders.

Maddern said that the WGMI.io deal provides “an opportunity to raise our heads” after several months of behind-the-scenes building, and to start sharing its vision for Floor’s roadmap forward.

In the short term, that means tapping some of WGMI’s functionality to enrich Floor’s offerings. Users can expect new features like trading analysis and trait pricing—that is, tracking demand for the individual traits of NFT projects, like the various visual details that make up a Bored Ape Yacht Club profile picture (PFP).

Maddern also envisions a feature that would let users specify what kind of NFT they want from a certain project (based on specific traits) and at what price point, and then receive an alert when a marketplace listing matches those criteria. It would be akin to what StreetEasy offers for real estate, he said, but for digital assets like Doodles and Apes.

Floor’s larger vision is to ultimately become the go-to destination for NFT collectors to not only view their own assets and track trends, Maddern says, but also to stay connected with projects, receive updates from the community, and take the temperature of market sentiment. In other words, an all-in-one hub for NFT owners.

Hall said that in traditional markets, there’s “a lot of formality” around the way that companies share information with investors, due to centralized structures and regulations. The long-term goal with Floor is to aggregate and present information and “signals from the community” alike to NFT collectors in a decentralized fashion—a shift she described in gaming parlance as going “from single-player mode to multiplayer mode.”

That’s also a shift for Hall, who left the corporate world of public company Robinhood for an NFT startup, but she said that it’s been “probably the most fun year of my career so far.” She’s enjoying the experience of building in the open, experimenting, and “getting your hands dirty.”

Floor eventually hopes to reach a much wider audience, but the when and how are still in the works. The invite-driven model will remain intact for the foreseeable future, Maddern said, as Floor continues building in the bear market and preparing for what it expects will be another growth cycle for the NFT space ahead.

“What’s fun for us in a period like that is that we can really understand the core use cases of people that are here, and who are still engaged and active,” said Hall, “but also spend a lot of time building for what we do believe will be the next wave of growth and adoption.”

Ethereum Could Benefit From St..