The U.S. equity market snapped a two-day decline on the back of better-than-expected corporate earnings and economic data, which dwarfed the impact of regional tension. Major digital assets have remained largely range-bound as geopolitical aggression dissolves into empty threats. Muted volatility may also be partly attributed to the lack of macro market-moving events in August. As of the time of writing, BTC is consolidating losses near the $23k handle after a marginal dip over the last 24 hours. The key resistance level near $23.5k persists, and the largest cryptocurrency by market cap won’t see much upside gain should it continue to struggle below the $24k mark.

In a similar vein, ETH remains buoyed above the $1,600 mark despite posting a marginal loss over the same period. The second-largest cryptocurrency by market cap is eyeing the immediate resistance at $1,650 to extend its upside gains. However, liquidity pressure in the crypto market may persist in the near term. In the derivatives market, the basis of far-month ETH futures has shown parity with spot prices, suggesting that the current implied yield of ETH may very well flip negative. In the altcoin market, most major altcoins saw mixed performances, with NEAR and APE topping the gainers’ chart with a nearly double-digit percentage increase, while SOL trimmed losses as the investigation into the recent breach bears interesting results.

Following the Nomad bridge’s exploit on Monday, there have been 13 separate hacks targeting cross-chain bridges so far this year. The amount stolen totaled around $2 billion in various cryptocurrencies and accounts for around 70% of stolen funds in various hacks and breaches this year. 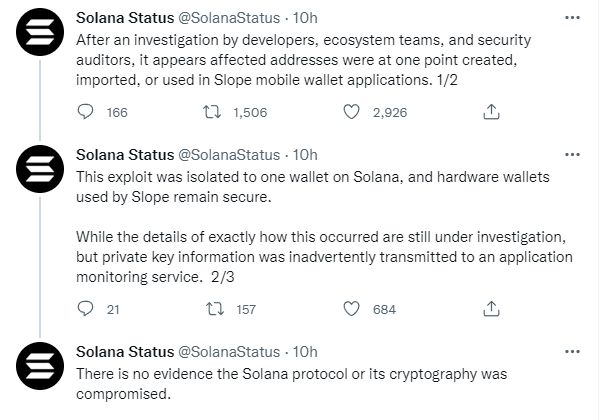 An investigation into the attack on the Solana network reveals that the affected addresses were once “created, imported, or used in Slope mobile application”. The investigation, led by a group of Solana developers, confirmed that the breach did not originate from a bug in the Solana core code, but instead evidence points to seed phrases generated in the Slope hot wallet being compromised due to unsecure storage practices. A statement from Slope Finance was shortly released after the investigation, confirming that a cohort of its wallet was indeed compromised during the attack. Slope claimed that the team has some hypotheses as to the nature of the breach, but has yet to come up with a definitive conclusion.

Synthetix: Thriving in the Bea..