Written By: Marcus Wang and the Crypto Insights Team

The U.S. Federal Reserve raised rates by 75 bps for the fourth consecutive week, while the central bank indicated that rates would eventually reach levels higher than initially projected. Further hawkish comments from the Fed chair rendered narratives around an imminent pivot moot, sending high-growth tech stocks plunging to levels last seen in 2018. Friday’s jobs report painted an overall picture of solid employment, leaving the Fed with no choice but to extend its tightening cycle further.

Amidst groom and doom facing equity markets, the web3 space saw broader adoption by non-crypto-native players last week, which bodes well for enhanced utilities of DeFi and NFTs. For example, Meta Platforms, the parent company of Instagram, introduced the NFT minting feature for Instagram, while JPMorgan completed its first DeFi trade on a public blockchain. Meanwhile, the crypto market saw sentiments improve, with BTC sustaining its upside momentum for the third week in a row. The largest cryptocurrency by market cap rose 1.41% week-on-week, while ETH experienced a downside correction of 1.37% in the same period. 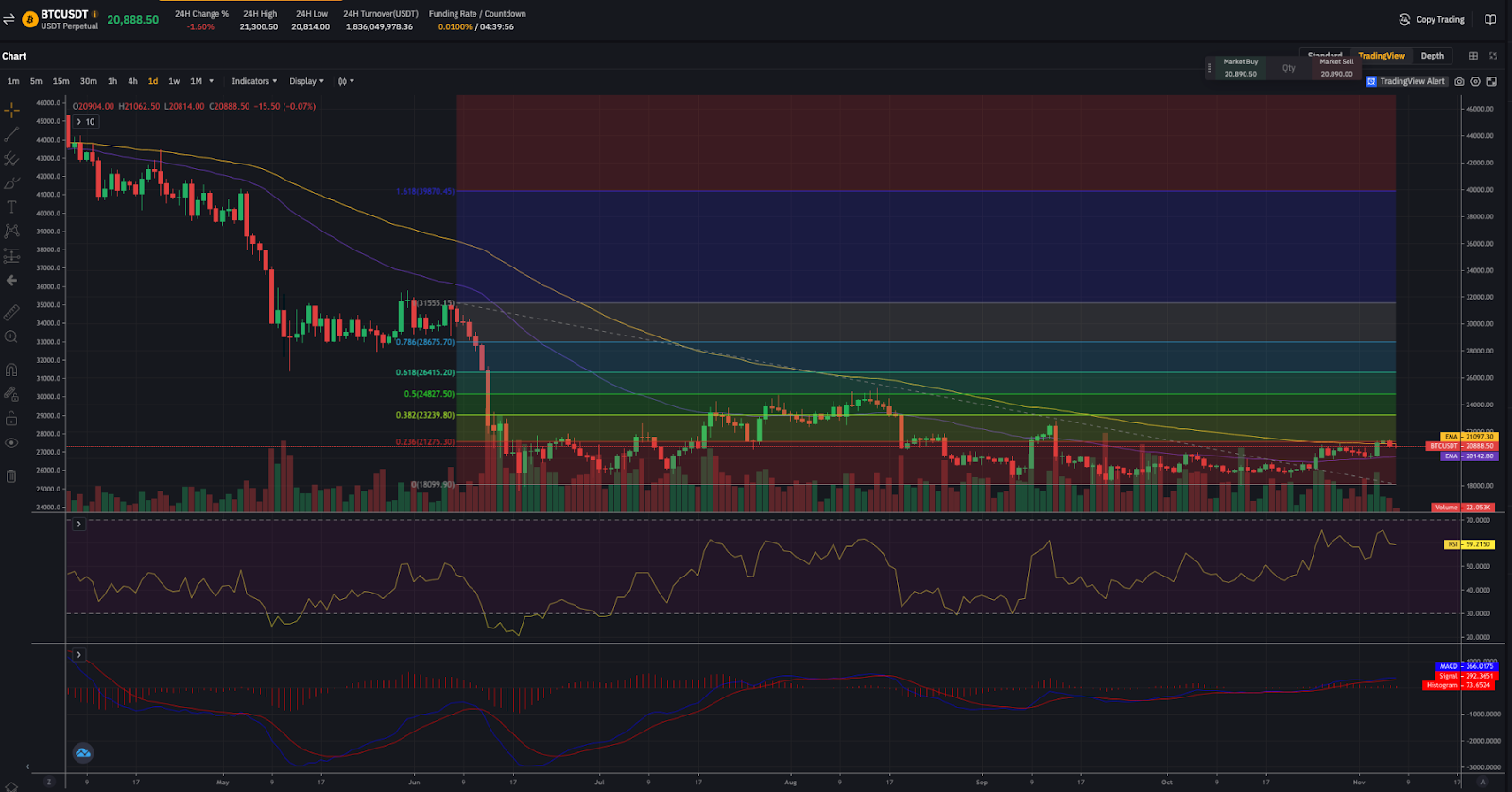 Bitcoin’s price movement has remained above the 50-day EMA level at $20.1k since breaking from a key resistance level in late October, revealing that the bullish momentum may continue in the near future. As the 30-day correlation between Bitcoin and Nasdaq Composite has retreated from elevated levels, the proliferating negative sentiments in equity markets have not dashed the hopes of BTC testing the $23.2k level. Regarding technical indicators, RSI has not reached the overbought level since the beginning of the rebound, suggesting an imminent price correction of a large magnitude may be unlikely. Furthermore, the Fibonacci retracement starting in June indicates $21.2k is a near-term resistance level, and a breakout from this level may send Bitcoin toward $23.2k.

The BTC futures open interests continued their uptrend with positive funding rates across large exchanges despite short liquidations in the previous week. What’s more, as the implied volatility of BTC at-the-money options continues to reach lower, the BTC put/call option ratio shows no sign of surging demand for downside protection, pointing to improved investor sentiments that may signal further upside.

Check Out the Latest Prices, Charts, and Data for BTCUSDT! 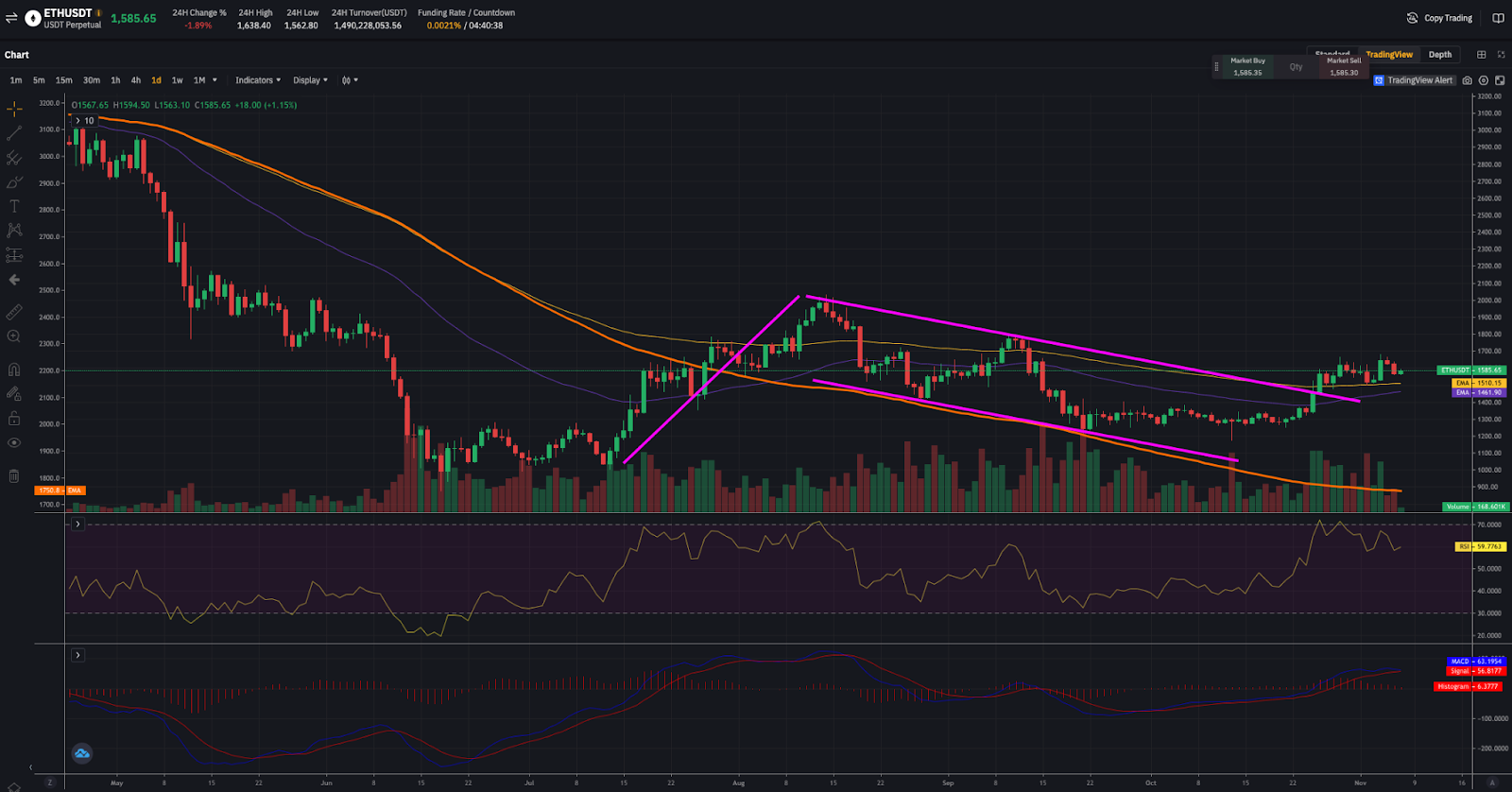 Ether holds firmly above the bull flag and the 100-day EMA level. On the back of shooting to the overbought zone last week, RSI retraced back to 60 as of the time of writing without a major correction. The current breakout was supported by the Guppy Multiple Moving Average (GMMA), a technical indicator used to anticipate a potential breakout, with the short-term group of GMMA averages moving above the long-term group last week. This suggests an uptrend in Ether’s price may be seen in the near future.

On another note, ETH/BTC ratio has rebounded remarkably from its lows in October, facing immediate resistance at the level of 0.076. A breakout from this level might set the stage for testing a historic high at 0.086, the level that was last seen right before the Merge.

Check Out the Latest Prices, Charts, and Data for ETHUSDT!

Some gems outperformed the market as the crypto market consolidated for another leg-up. AR, the native token of the decentralized storage solution Arweave is leading the pack with a 39.3% gain in the past week. The token’s recent rally is fueled by bullish news on the adoption front, as Meta announced plans to bring data permanency to web3 with the help of Arweave. 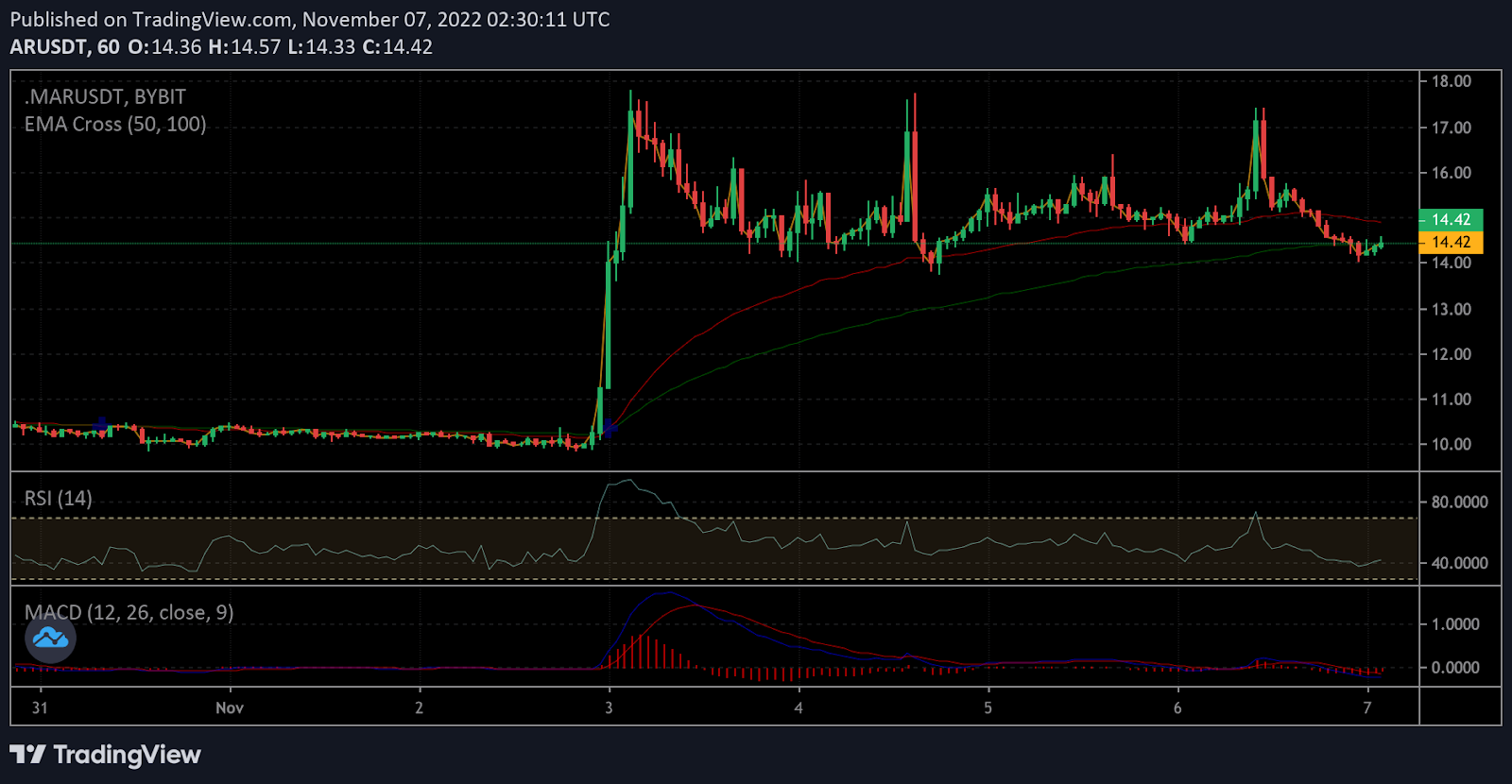 On the 1-hour chart, AR’s price action saw impressive surges last Thursday. However, the price has since entered a consolidation phase, with resistance levels sitting in the $14.4 to $17.5 zone. As of the time of writing, the pair has momentarily dropped below the 100-hour moving average, which may serve as a key price support for the storage token. On the 1-day chart, RSI remains in the overbought region, while the MACD line is converging with the signal line, suggesting that a surge in volatility, if not a complete turn of the tide, lies ahead.

Check Out the Latest Prices, Charts, and Data for ARUSDT!

Trade with up to 25x leverage on our new trading pairs: