The global derivatives market is the largest market in the world, commanding a notional value of around $600 trillion with a gross value of about $12.4 trillion, based on BIS commentary of data ending in December 2021. To put things into perspective, its notional value is more than all of the world’s real estate combined — which was valued to be around $327 trillion in 2021 according to a report by Savills.

As such, it comes without surprise that the crypto derivatives market commands up to 61.7% of the total crypto market share in terms of monthly traded volume (as of May 2022). However, most of this volume happens on centralized exchanges (CEXs), where assets that can be traded are not determined by the users. 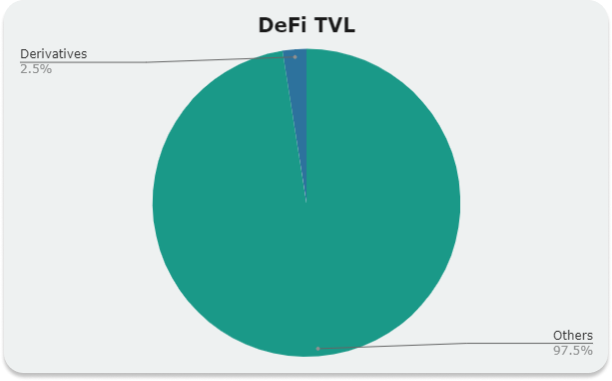 Looking into the DeFi market, according to DefiLlama, the combined total value locked (TVL) in derivatives protocols stands at $2B, which represents just 2.5% of total DeFi TVL, which is at $80.25B at time of writing. This shows that there is much room for the derivatives market in DeFi.

Note: At time of writing, DefiLlama does not include TVL from ApeX.

ApeX is a decentralized, permissionless, and non-custodial derivatives protocol on the Arbitrum mainnet that allows anyone to create a perpetual swap market for any token. ApeX provides users with full access to assets on Ethereum and offers maximum flexibility while maintaining full control of their assets.

This means that users only have to supply the base asset while the quoted asset is synthesized by the eAMM, resulting in higher capital efficiency. Additionally, the eAMM model allows users to trade on any onchain native asset pair — another benefit of being permissionless.

ApeX uses both TVL and protocol controlled value (PCV) models, allowing users to make use of either. The PCV model aims to solve the problem of mercenary capital brought forth by TVL models that incentivize user-owned liquidity. All assets in the PCV model are owned by the protocol, which guarantees the liquidity of each perpetual contract that utilizes it.

Besides funding fees, all trades incur a 0.1% transaction fee. Of this, 10% is distributed back to the eAMM’s respective base asset, 30% as $APEX staking rewards, and 60% to the DAO treasury. On the other hand, liquidated trades incur a liquidation fee of which 95% is distributed to the DAO treasury and the remaining 5% goes to the protocol liquidator.

ApeX allows users to place limit orders via its limit order contract. Unlike market orders which are immediately executed on the blockchain, when a user places a limit order, the order is passed to a “keeper” bot which only submits the order to the smart content once asset prices reach the specified order price.

“Keeper” bots are managed by the ApeX team, and the order contract only allows whitelisted wallets to execute limit orders. This seems to be the only part actively managed by the team in an otherwise permissionless protocol. According to the ApeX Docs, this is for security reasons in order to safeguard user signatures.

Unlike the CLOB models on CEXs, limit orders on the eAMM-based DEX are executed immediately since there is no need to wait for a counterparty.

ApeX has conducted one audit with BlockSec and has posted a bug bounty on Immunefi for $50K. This bounty represents 1.2% of current protocol TVL ($4.1M) — as per Immunefi, critical bug bounties should represent at least 10% of protocol TVL. Hence, scaling the bug bounty alongside protocol TVL might better incentivize hackers to submit bounties and keep user and protocol funds secure. 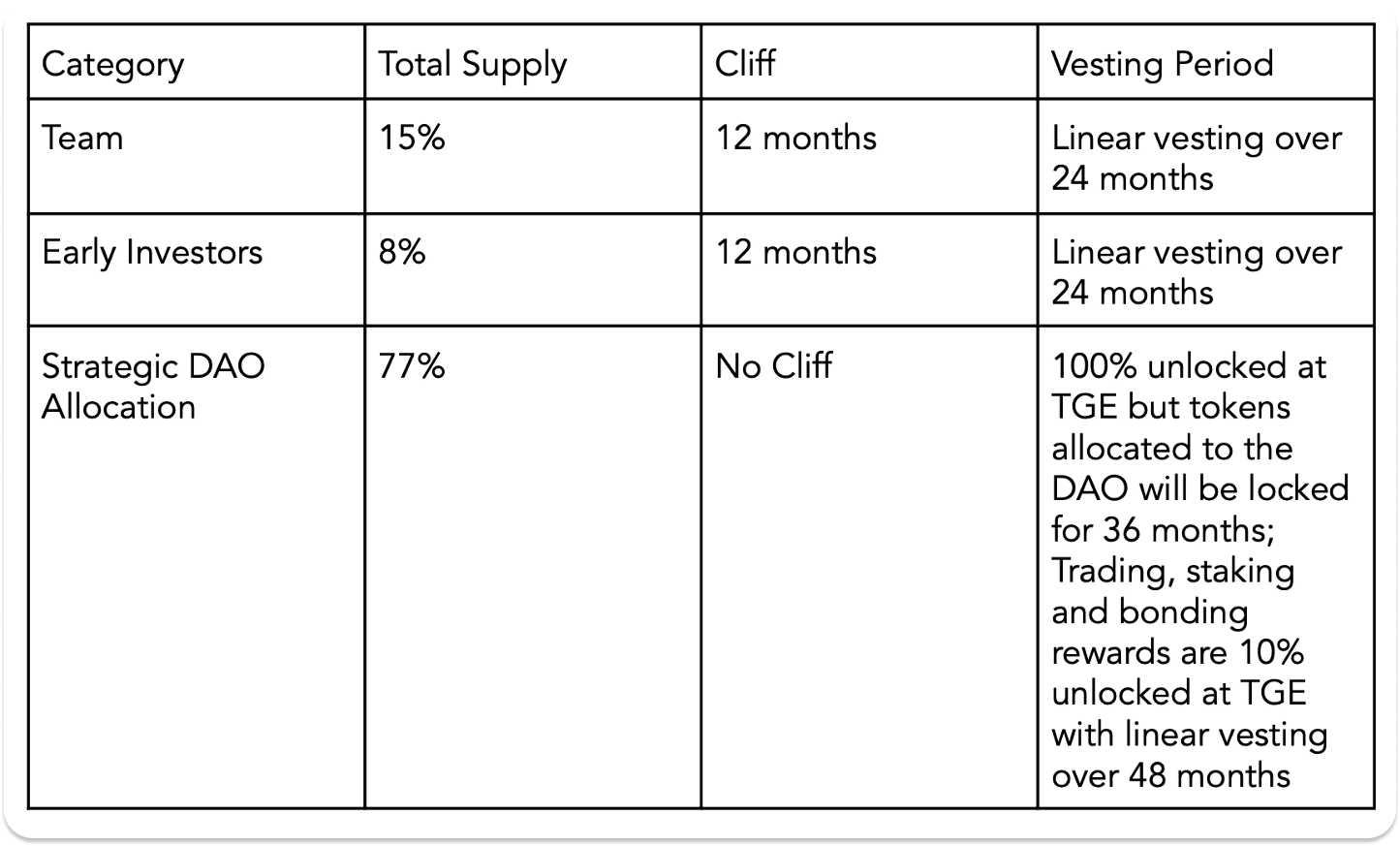 The native token of the ApeX Protocol is $APEX. It has a maximum supply of 1 billion tokens,  approximately 588K of which are circulating at the time of writing. Tokens are distributed between the team and its advisors (15%), as well as early investors (8%), which are on a 12-month cliff and 2-year vesting period. Backers include some notable names such as Jump Trading, Dragonfly Capital, and Tiger Global. 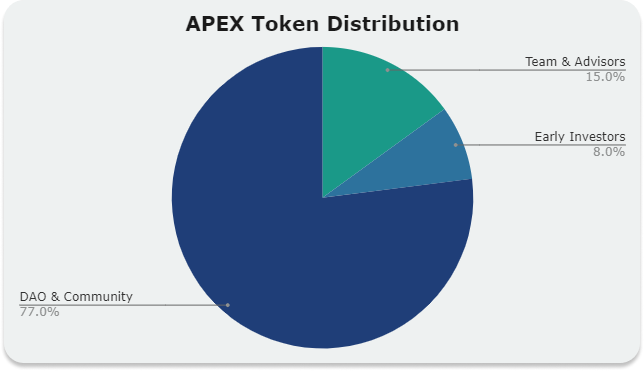 The remaining 77% of the total supply is allocated to a “Strategic DAO Allocation” pool, which is further divided into two buckets: DAO Treasury and a rewards pool.

Oddly, it is mentioned that 100% of DAO tokens are unlocked at TGE, but locked for 36 months. On the other hand, 10% of tokens bookmarked for rewards and incentives were unlocked at TGE with a 48-month vesting period.

Of the 770M tokens, 41.4M tokens are allocated to holders of the ApeX NFTs. “OG” NFT holders will receive 20.8M tokens on a 6-month cliff and 6-month linear vesting period, while the remaining 20.5M tokens were allocated to ”Predators” NFT holders, to be distributed within 6-months via a last-man-standing game in which users are incentivized to hold their NFT tokens for as long as they can to be able to redeem more tokens from the allotted pool.

There is no further clarification in the litepaper regarding how much of the 77% DAO allocation is divided between the DAO treasury and rewards pool. When queried, the team indicated that they hadn’t locked themselves into a rigid plan for the 77% allocation, as they would like to maintain flexibility.

Seeing that the circulating supply is currently around 588K tokens, and ignoring Predator NFT emissions for simplicity, we can assume that around 450K tokens were unlocked at TGE for incentives and rewards. This means that approximately 4.5M tokens were allocated to incentives, while the remaining 765M tokens belong to the DAO treasury at present. A quick back of the envelope calculation (based on the 24-month vesting schedule) confirms this, as shown in the chart above.

Note that assumptions were made based on available data and are not to be taken as 100% accurate. 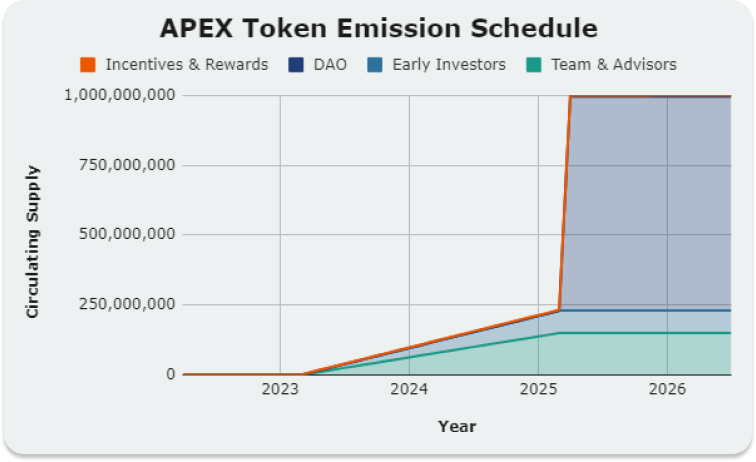 Regardless, we can expect a huge unlock from the DAO allocation after a period of 36 months. Since these tokens are controlled by the DAO, one could assume these tokens are out of circulation until utilized. Conversely, this could also result in massive selling pressure should the tokens be released with volume. 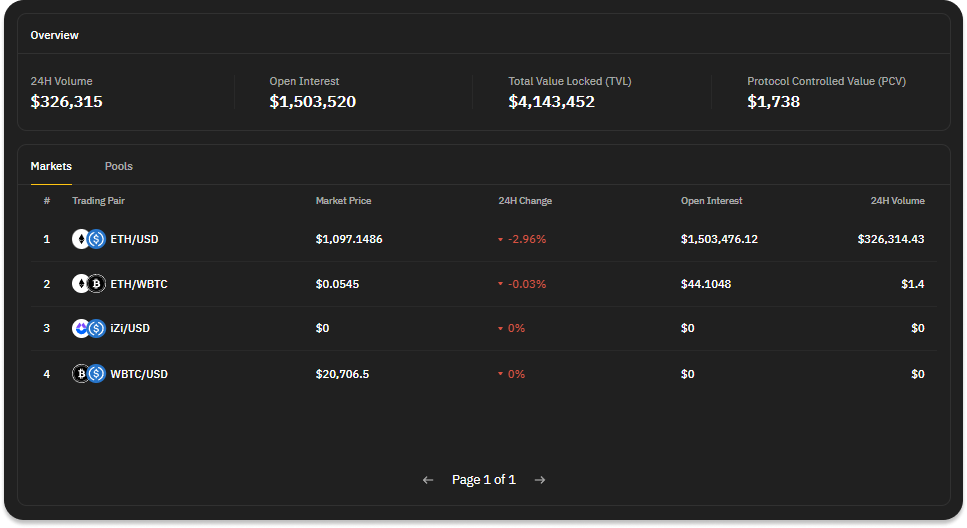 Having just launched in April 2022, ApeX Protocol is still new to the DeFi derivatives market. According to their analytics dashboard, the protocol currently has around $4.04M TVL, and a 24H volume of $611K at time of writing. In comparison, dYdX, the largest derivatives protocol, sits at $725M TVL at time of writing. With only four pools created, there is still much room for growth should ApeX be able to capture a portion of the derivatives market. 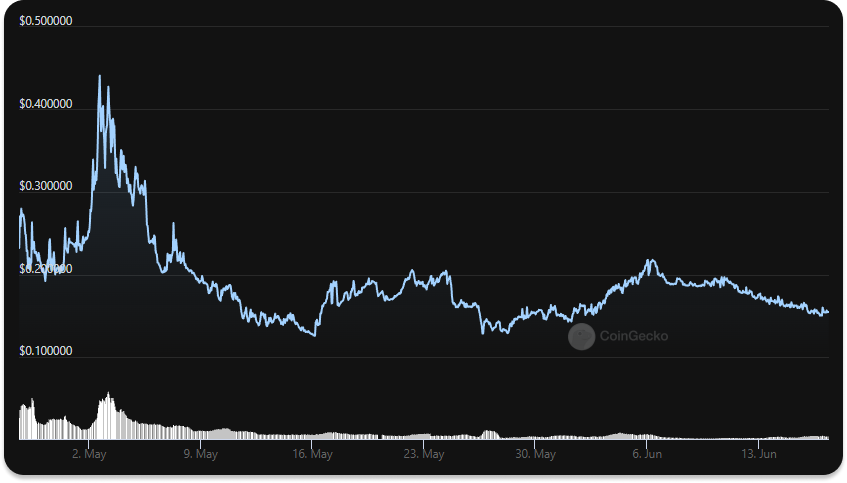 With $4.1M in TVL, this gives ApeX an MC/TVL ratio of 0.02 and an FDV/TVL ratio of 36.6. When compared with dYdX and GMX, ApeX has a lower relative MCap/TVL ratio but a larger FDV/TVL ratio, showing that ApeX’s TVL has room for growth with respect to its current valuation.

ApeX brings a permissionless derivatives protocol to DeFi users, allowing flexibility and maximization of capital efficiency with its eAMM model and single-asset liquidity models. Furthermore, by having a PCV model in place, the protocol can work to build its own liquidity to reduce reliance on mercenary capital.

With a large derivatives market up for grabs, there is still much room for growth. However, global macroeconomic conditions remain poor and much of the fallout from the Terra, Celsius, 3AC and Voyager dominos are yet to be felt. Hence, we may have to be patient to see the overall crypto market recover. Investors should also be cautious of the disproportionately large amount of APEX tokens yet to be unlocked as this may cause large sell pressures down the line.

Disclosure: Members of Bybit may be invested in some or all of the tokens and projects mentioned within the following article. This statement discloses any conflict of interest and is not a recommendation to purchase any token or participate in any of the mentioned ecosystems. This content is purely for educational purposes only, and should not in any way be construed as investment advice. Please exercise caution and practice your own due diligence if you’re planning to partake in any of these projects in any way.

From Autonomous Cities to US P..

Coinbase to shut down Coinbase..