A Deep Dive Into The IDO Landscape

A Deep Dive Into The IDO Landscape The initial DEX offering (,IDO,) has been used since its inception in 2019 as an avenue for projects to seek funding as well as for investors to speculate on. IDOs were not the first iteration of crowdfunding, however. In 2013, the first initial coin offering (ICO) was held by ,Mastercoin Protocol,, which raised $500,000 in Bitcoin. Ethereum itself was funded via an ICO in 2014, raising ~$18 million.

In the 2017 bull run, ICOs raised ,$5.6 billion, and by 2018 the preferred crowdfunding method had begun to shift to initial exchange offerings (,IEOs,). This was due to the unregulated nature of ICOs, as any person could launch an ICO via a smart contract without much accountability. This resulted in a significant number of scams — in fact, Bloomberg published a ,report, that up to 80% of all ICOs in 2018 were found to be scams.

In 2019, Binance launched the first IEO on its platform Binance Launchpad with the offering for BitTorrent Tokens (BTT), raising $7.1 million. However, because IEOs typically charge listing and participation fees, both projects and investors began to seek other alternatives.

In 2019, IDOs began to gain traction, due to their low to zero fees and decentralized nature. Thus, IDOs became the main platform by which projects preferred to seek fundraising outside of private and early seed rounds. Since the first IDO in 2018, 2365 IDOs have taken place, raising more than $1.6 billion in funds (Source: CryptoRank, Dec. 2022). 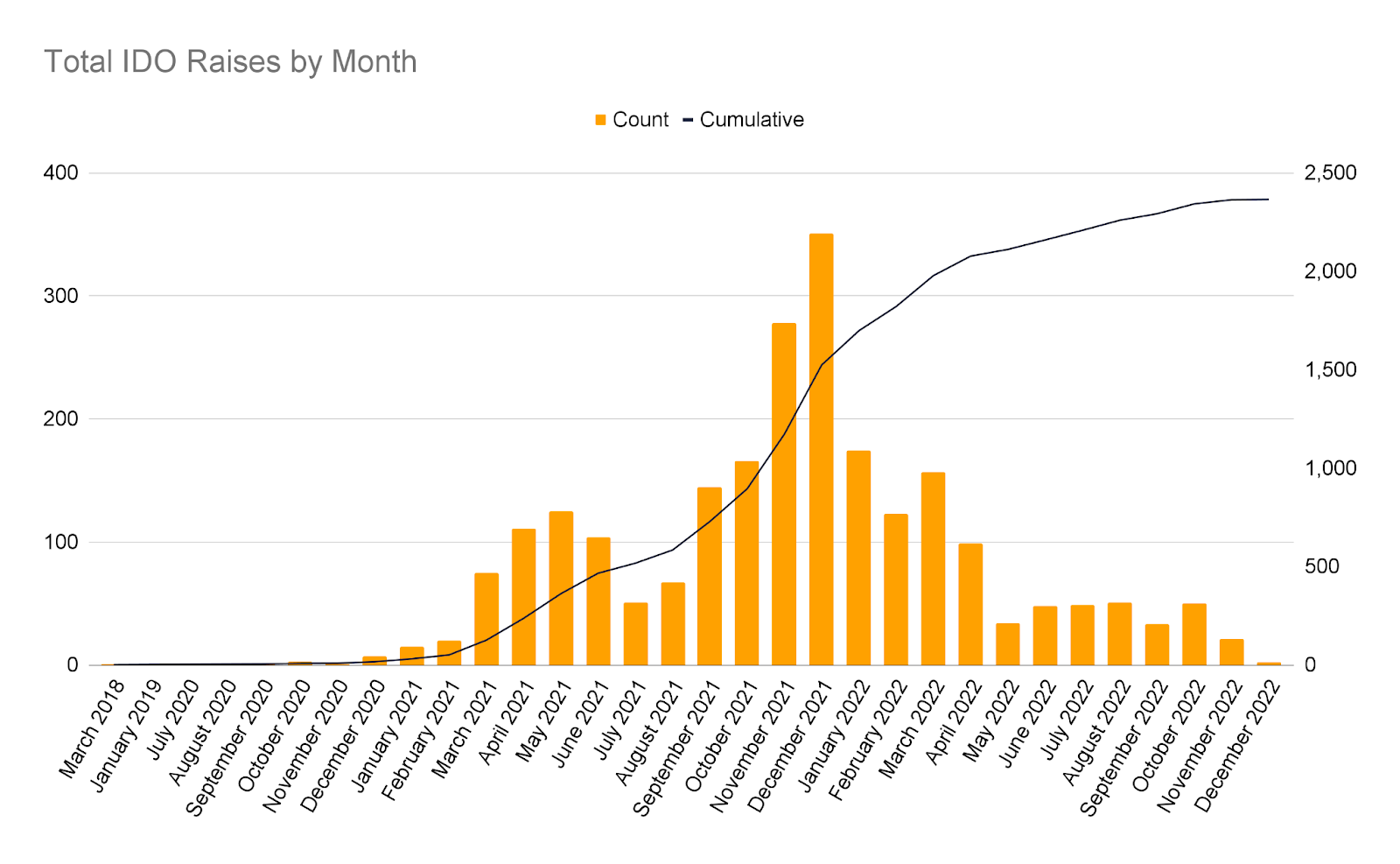 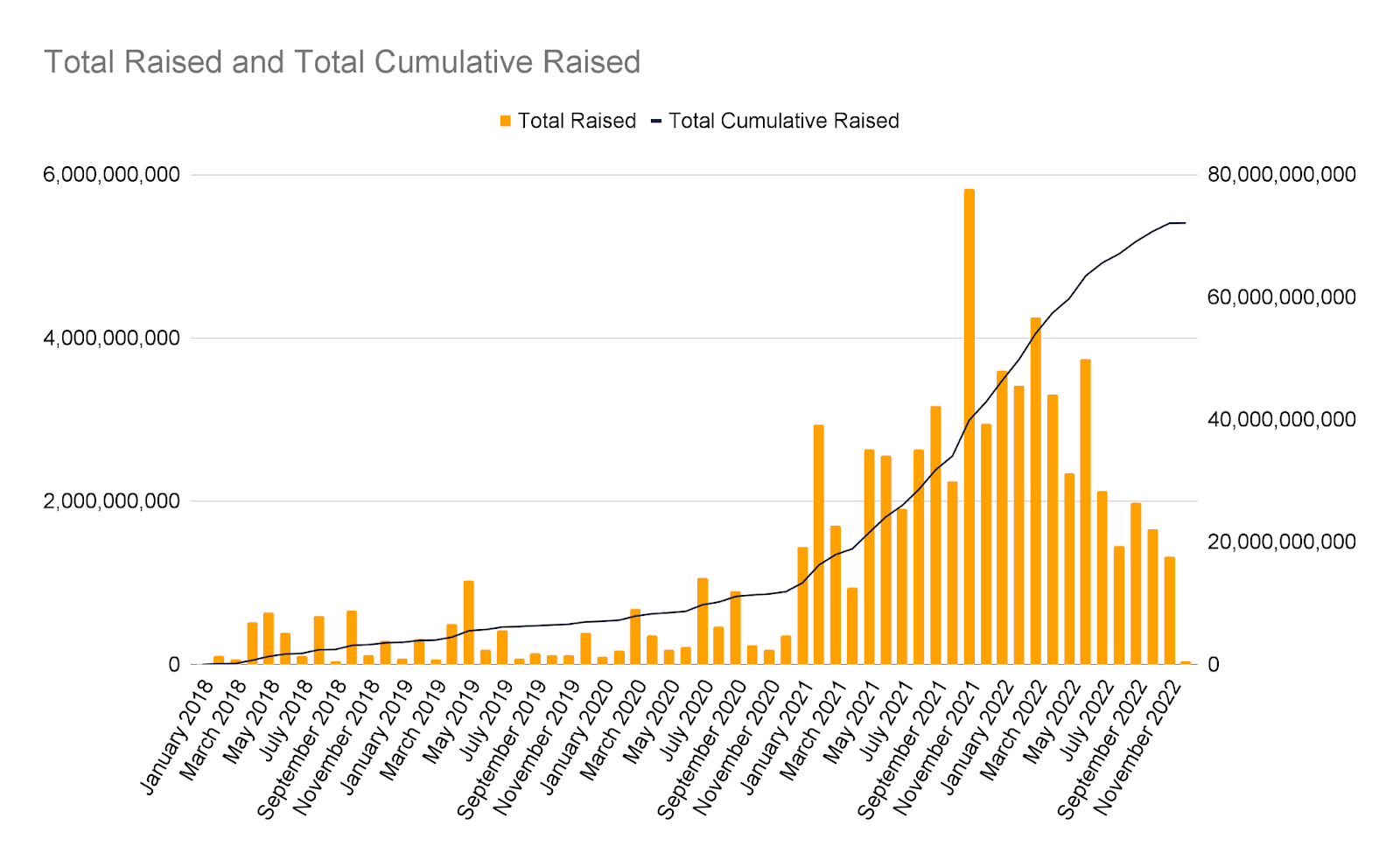 As per CryptoRank, the current top five IDO platforms are DAO Maker, Polkastarter, Red Kite, GameFi, and BSCPad. These platforms are ranked based on a weighted scoring system by CryptoRank, which is based on the average Current and all-time high (ATH) ROI of each platform and its total number of raises conducted. Thus the more raises conducted on a given platform, the more weight the performance of its IDOs has on its ranking.

The top five platforms have a total of 407 raises conducted between them, with a total of ~$108 million raised, and an average Current ROI of 0.54 times and an average ATH ROI of 39.7 times. This shows that while raises on these platforms have given investors significant returns at ATHs, the bear market has not been kind and most projects’ valuations have fallen considerably since then, as indicated by the poor Current ROI. 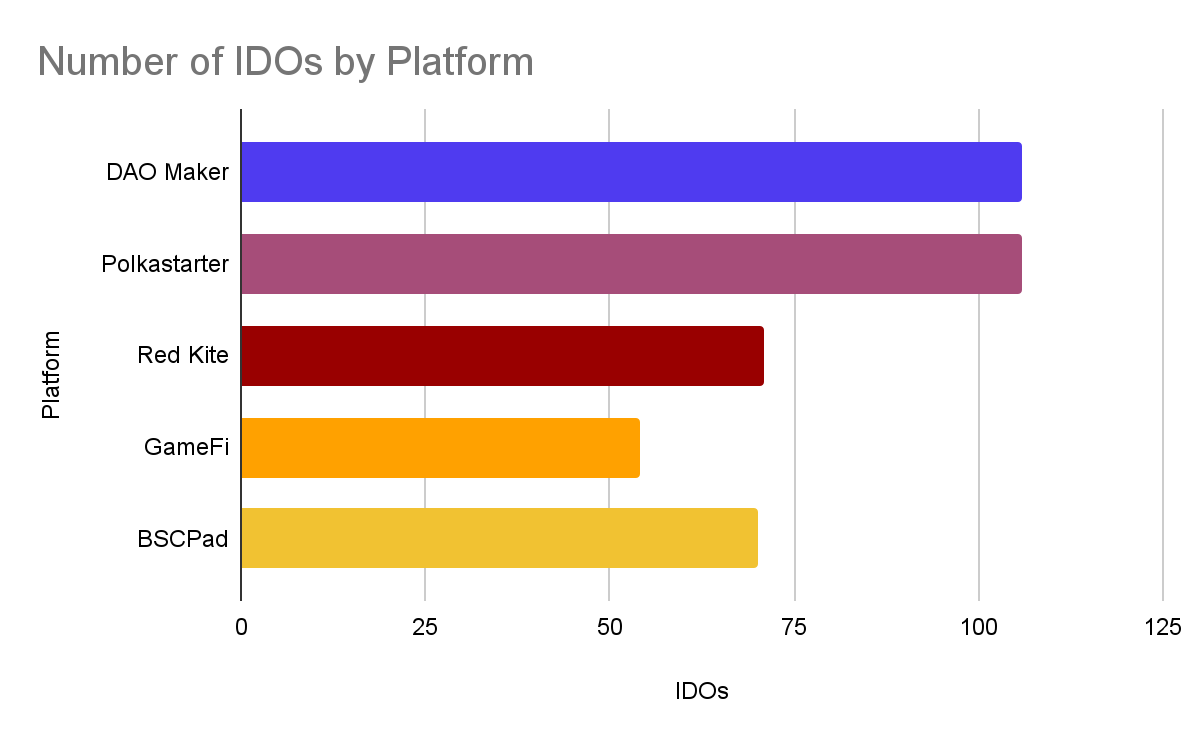 Among the top five IDO platforms, DAO Maker and Polkastarter are the most prolific, with both platforms having conducted 106 IDOs, followed by Red Kite (71), BSCPad (70), and GameFi (54). 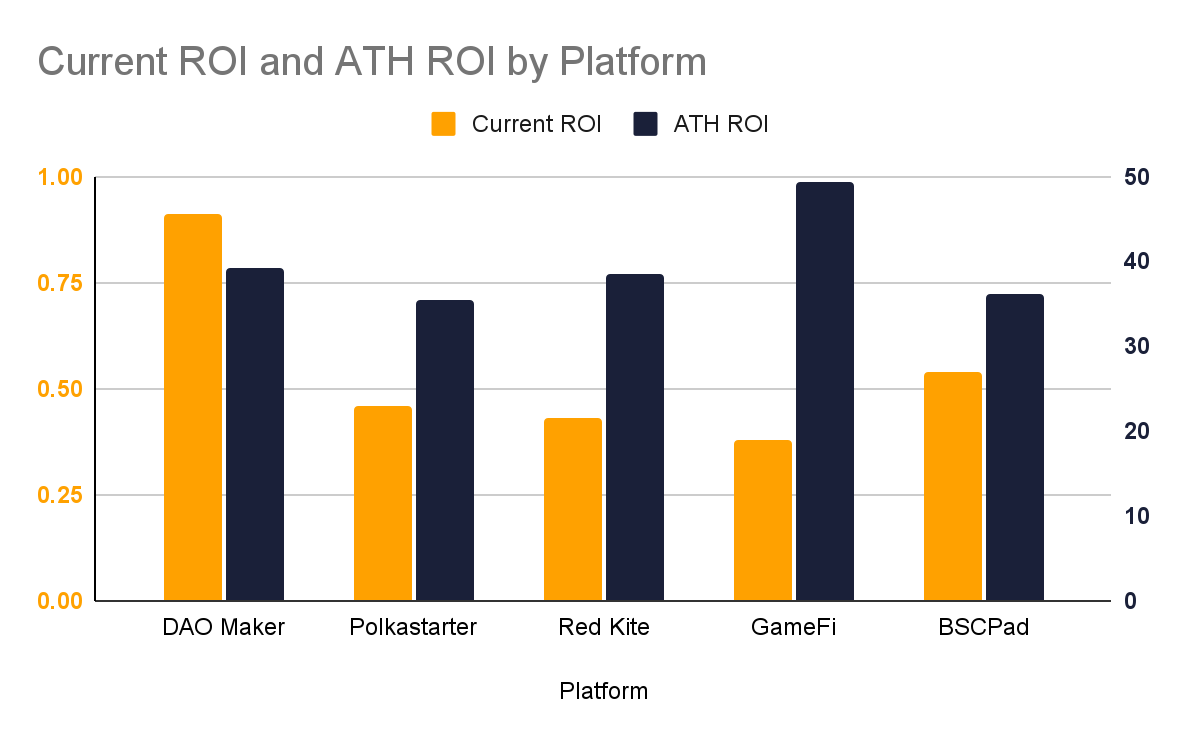 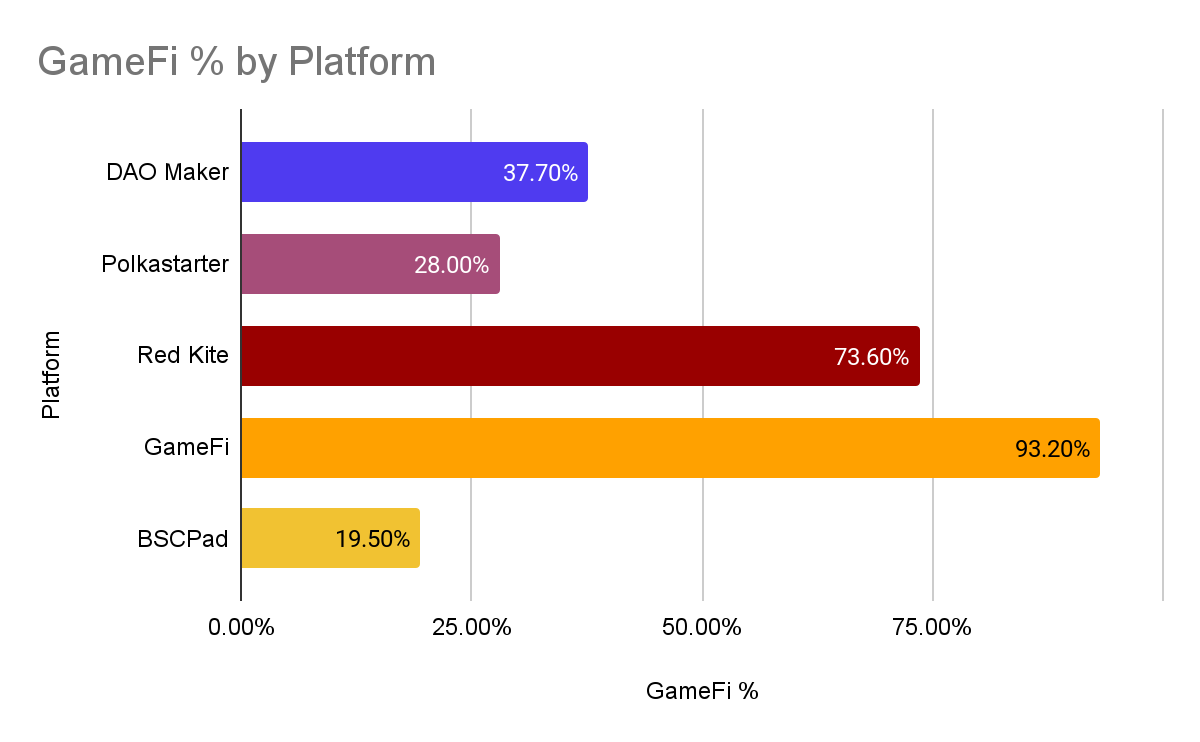 In terms of average ATH ROI, GameFi leads the pack with an average ATH ROI of 49.4 times. This could be attributed to the high proportion of its raises (93.2%) being in the GameFi sector, which has been a hot sector during the 2021-2022 bull market.

However, in terms of average Current ROI, DAO Maker outperforms the rest with an average Current ROI of 0.91 times, nearly 70% more than the next best. This could be attributed to the more diverse raises on DAO Maker, flattening out the volatility of its ‘portfolio’. 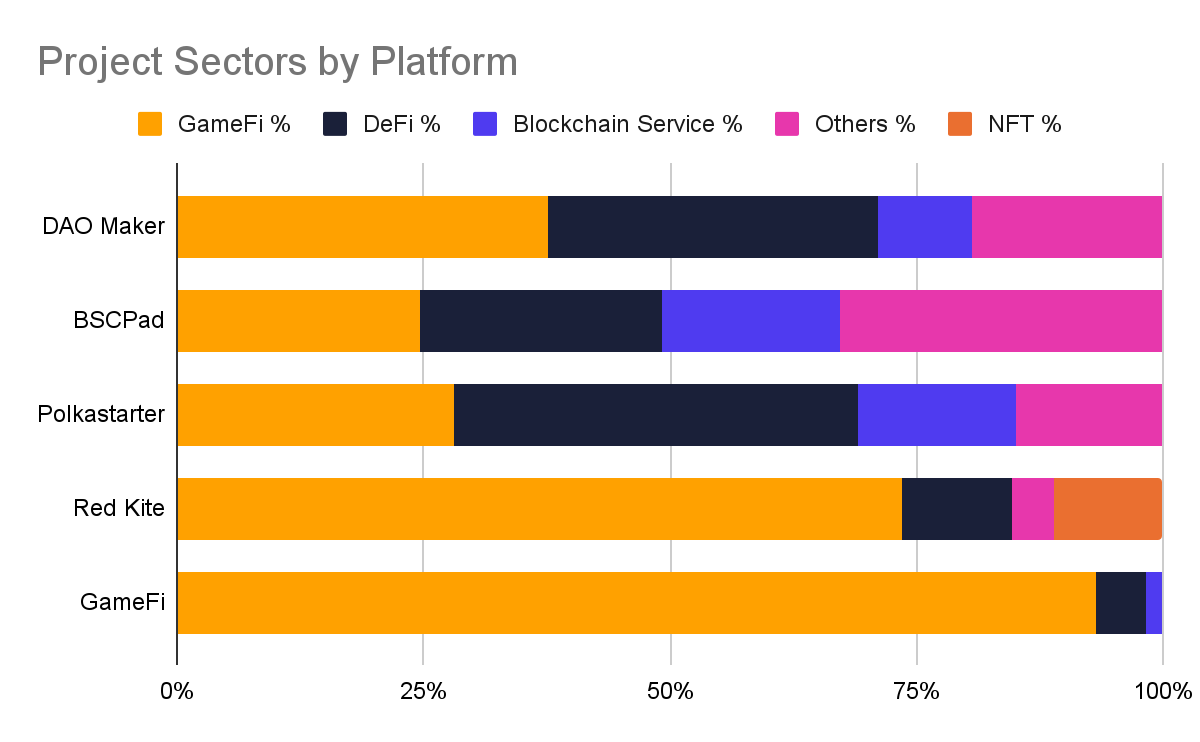 This is further illustrated by the chart above when sorting by Current ROI in descending order, a pattern can be seen in which the platforms with a more balanced ‘portfolio’ performed better.

The introduction of IDOs has made it easier for retail investors to participate in early-stage funding for new projects and projects to raise capital without having to go through complicated procedures from a typical private round. However, this means that projects are potentially limited by the availability of capital from retail investors depending on market conditions. 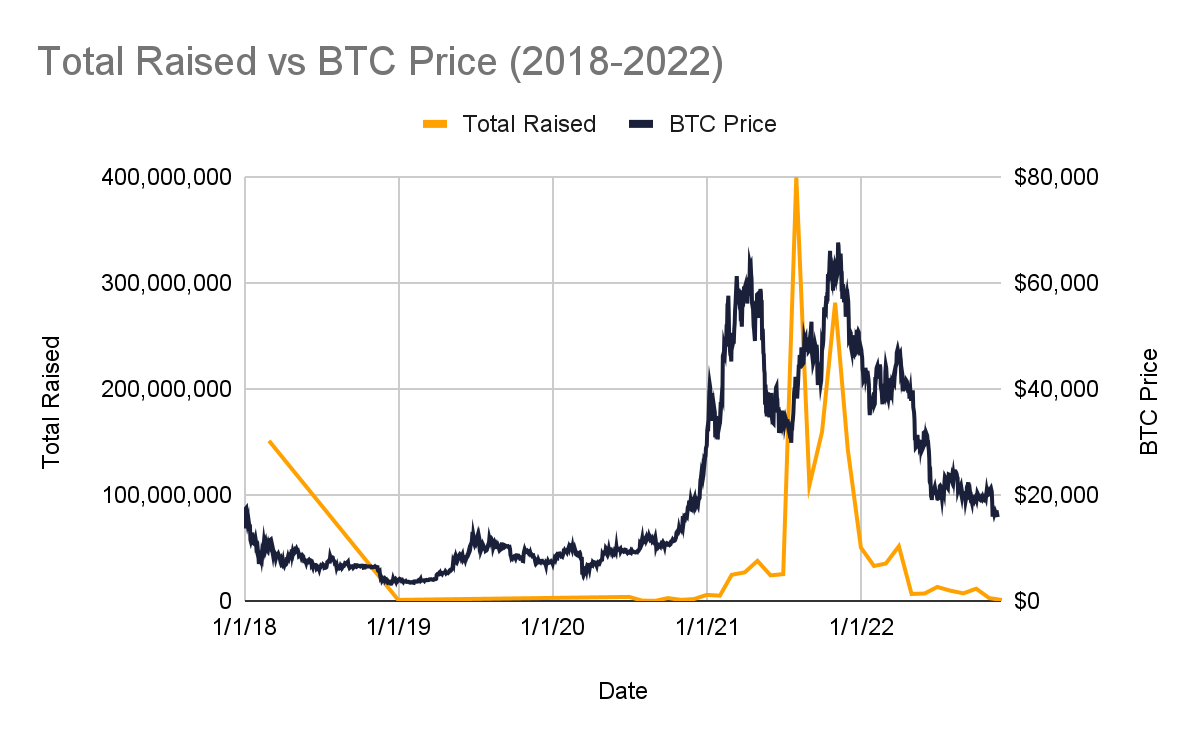 By plotting data from CryptoRank and overlaying BTC price data, we can observe that the total amount raised from IDOs seems to follow market cycles, with more funds raised during the peak bull market in late 2021 – early 2022. In 2021, more than $1.2 billion was raised on IDO platforms. In contrast, 2022 has seen only ~$228 million raised on IDO platforms as of the time of writing, indicating a slowdown in IDO raises in correlation to current market conditions. 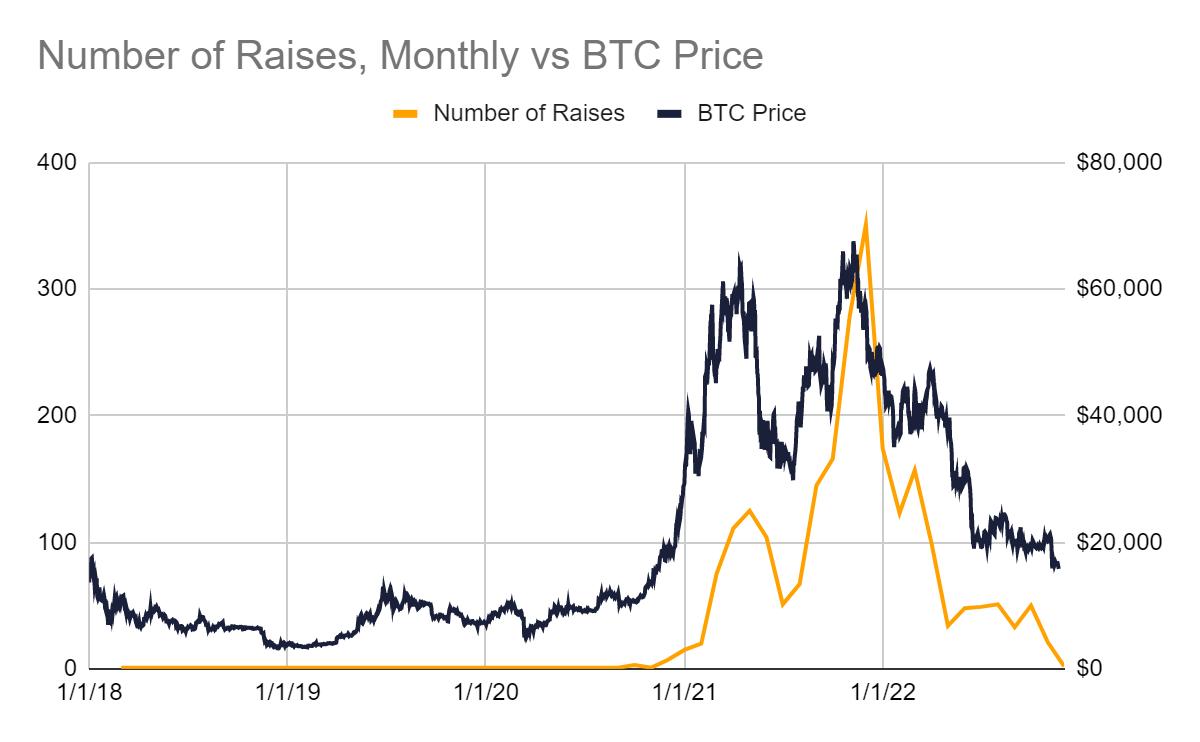 The correlation of the IDO market with overall market conditions is even more evident when overlaying the BTC price chart over the number of IDOs by month. As per data from CryptoRank; in 2021, there were a total of 855 IDOs, while as of the time of writing, 2022 has only seen 362 IDOs. This shows that IDOs tend to occur during bull market conditions and, conversely, tend to reduce in number during a bear market. 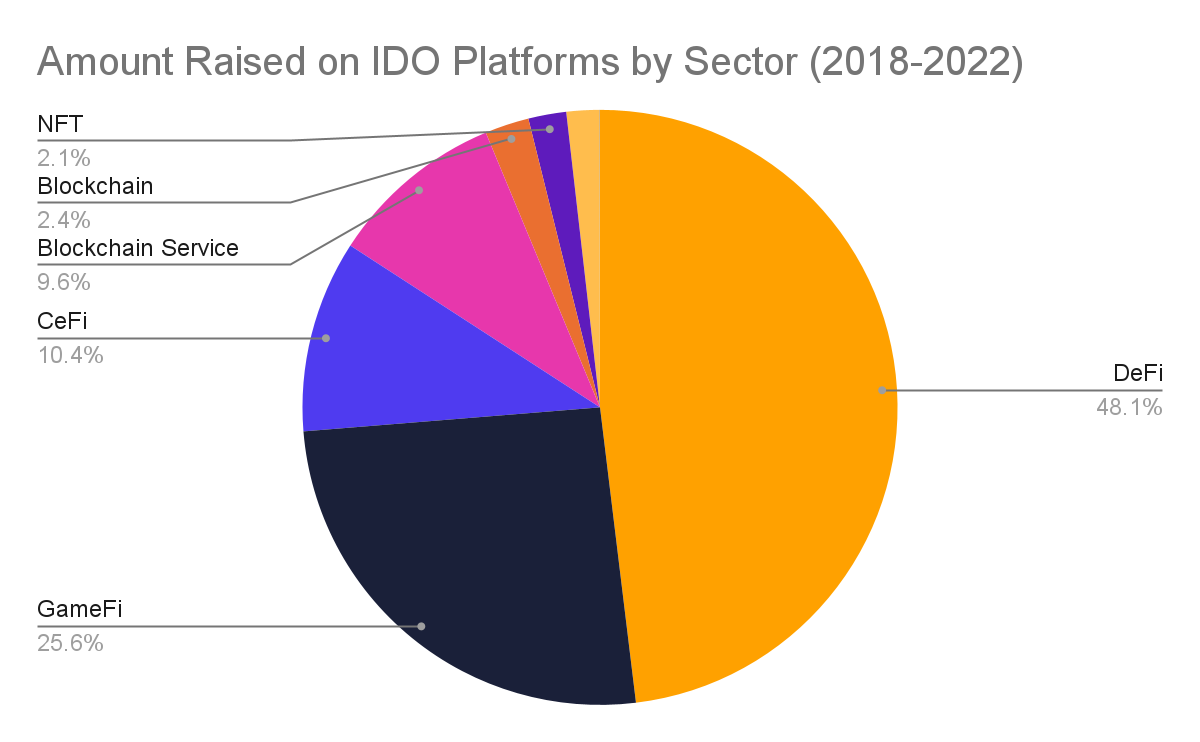 As shown above, the DeFi sector has raised the most funds on IDO platforms, followed by GameFi. The GameFi sector exploded after the success of Sky Mavis’ Axie Infinity, as developers and investors alike looked to capitalize on the success and virality of Play-to-Earn (P2E) games. This led to a spinoff of multiple X2E categories, the most popular of late being Move-to-Earn (M2E), with the success of ,StepN, and ,Sweatcoin,. However, the sustainability issue of X2E games has never been successfully solved and has led to the death and price-dumps of most, if not all tokens related in this sector. 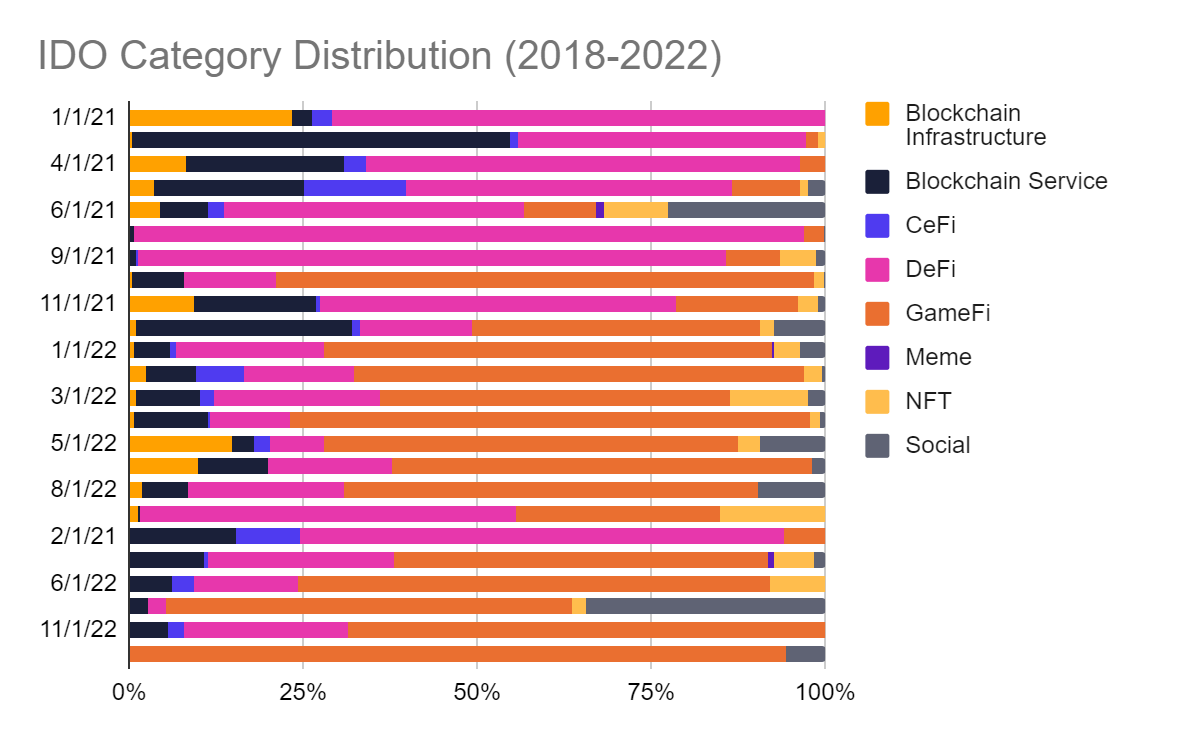 The above chart clearly shows the correlation between the number of raises in the GameFi and DeFi sectors with market sentiment at the time. DeFi’s market share of IDO raises exploded in Q1 2021 and decreased towards the end of the year, coinciding with DeFi Summer of 2021. Axie Infinity’s explosion between July and November 2021 led to the rise of the GameFi sector in 2022, which is reflected in the large market share of IDO raises in the GameFi sector during that same period.

It is clear that available liquidity in the market depends on market conditions at the time. Thus, projects may find it easier to raise funds in a bull market rather than a bear market. However, for investors, investing in the bull market does not always work out. 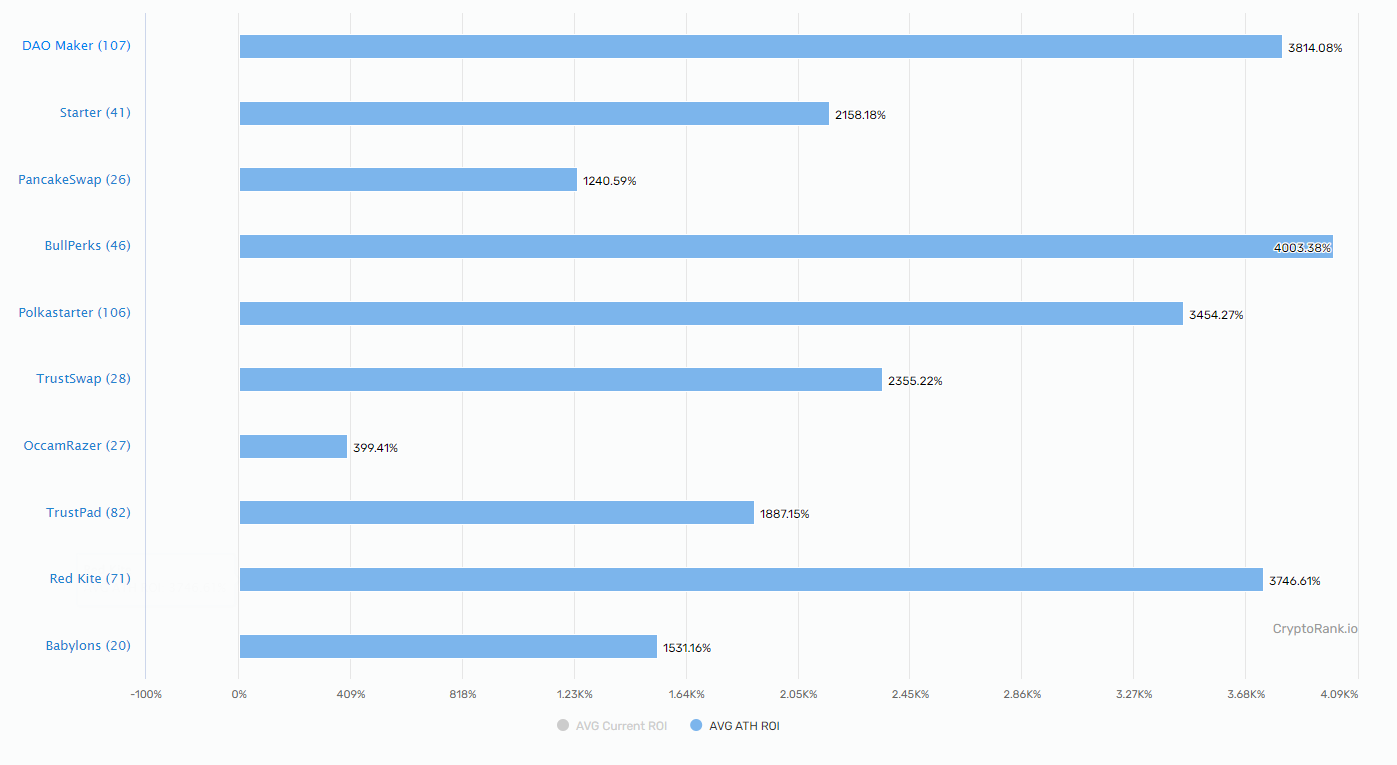 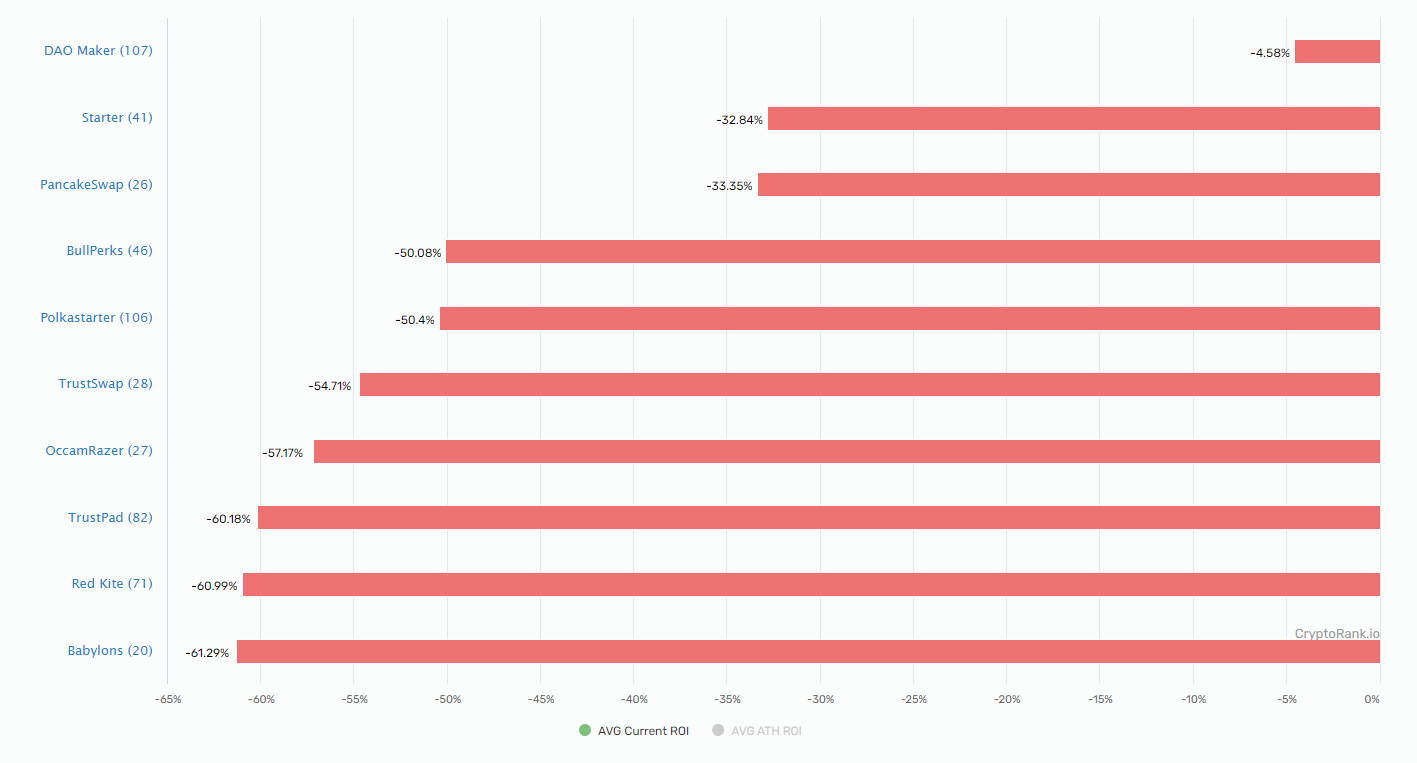 As seen above, while average ATH returns of various IDO platforms have been great, this means that investors would have to sell at the peak of the respective tokens’ price in order to profit. A look at current ROI from Dec. 2021 to Dec. 2022 shows that most if not all platform returns are currently negative. This is due to the fact that raises conducted at the peak of the bull market are now significantly below its launch valuation in current market conditions. Thus, investors with ample liquidity during bear markets might be better positioned to discover projects with sustainable business models and profit during the bull market cycle.

In conclusion, initial DEX offerings (IDOs) have become a popular method for crowdfunding in the crypto market since their inception in 2019. IDOs have low or zero fees and are decentralized, making them attractive to both projects seeking funding and retail investors looking to participate in early-stage funding. Furthermore, while decentralized, IDO platforms still provide greater transparency and accountability for investors, since projects typically go through vetting procedures and governance proposals before launching on an IDO platform.

In addition to the benefits mentioned above, IDOs have also made it possible for projects to raise capital without having to go through the complicated procedures associated with traditional private rounds. This has allowed a wider range of projects to access funding and has provided investors with more opportunities to participate in early-stage funding. Despite the challenges posed by market conditions, IDOs have proven to be a valuable tool for both projects and investors in the crypto market.